This StoryCorps conversation was one that was difficult to have, and for some, will be hard to hear. It happened at a prison, where a father sat down to talk with the school shooter who killed his son.

On December 14, 1992, Wayne Lo, an 18-year-old student at Simon’s Rock college in Massachusetts, stalked the campus with an SKS semiautomatic rifle loaded with ammunition he ordered over the phone and had delivered to him at school. He fired at random, killing two people and wounding four others. At the time, he said he was receiving commands from God. Today, Lo is serving two life sentences without the possibility of parole.

Greg Gibson’s son Galen, also a student at Simon’s Rock, was murdered that night. In the years since, Gibson has set out to understand how it happened, in the hopes of preventing anyone else from having to live through what he has. He interviewed other people involved in the shooting — victims and their families, school officials, even the man who sold Lo the gun. He later put those conversations into a book, Gone Boy: A Father’s Search for the Truth in His Son’s Murder.

Then, after it was published, Gibson started getting letters from the one person he hadn’t talked to: Wayne Lo.

As the 25th anniversary of the shooting approached, Gibson visited Lo in prison for a StoryCorps interview. Gibson said he wasn’t looking to forgive him or to find closure, but just to look Lo in the eye and talk. It was the first time they had ever spoken. 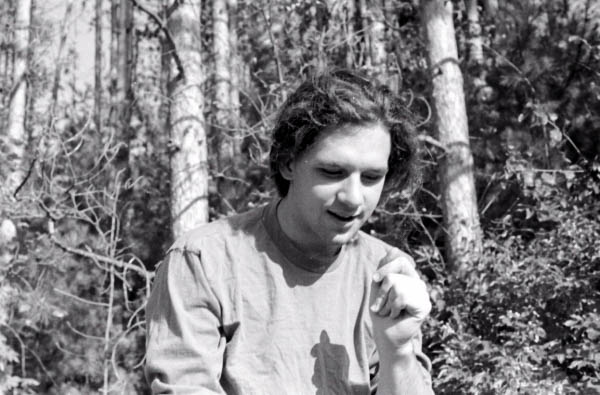 In the introduction to his book, Greg writes about his often complicated journey:

But what about this matter of moving on, and the healing and forgiveness it implies? There’s a lot of grand-sounding mumbo jumbo in circulation, but I’ve never read book or seen a talk show that can explain the mystery of a person making a conscious decision not to be defined by a Bad Thing, and simply living life from that point on, day-by-day. Then the Bad Thing becomes just a part of a life, and when we look around at other people we discover that most of them have experienced bad things too, and have made similar decisions. Survival is the rule, not the exception, and I can’t understand the “why” of it any more than I can understand why a cut heals over.

The idea of forgiveness is a greater mystery still—one I’ll spend the rest of my life attempting to unravel. As it happens, I’ve got a helper in this endeavor, a strange sort of sidekick. His name is Wayne Lo and he’s the man who murdered my son.

Wayne writes to me a few times a year, usually with a small check, which I deposit in the Galen Gibson Scholarship Trust. He earns the money by selling his artwork on the internet. This made the news for a moment in the spring of 2007 when a zealous fellow down in Houston realized that murderers were cashing in on their crimes. He coined the term “murderabilia” and decided to put an end to this practice.

Media people contacted me for an opinion, expecting some juicy murdered-son outrage. I opined that donating money to a scholarship fund in Galen’s name was one of the ways that Wayne Lo, locked in prison for the rest of his life, could try to atone for what he’d done. Society, I told them, has been very efficient about punishment, but backward about reconciliation and rehabilitation. This was not the answer they wanted to hear, so it didn’t make the news…

…There are endless branches on this journey, and no two people’s experiences are ever the same. I hear a lot about what I “ought” to be doing and feeling and, as was the case with the “murderabilia” issue, I am often confronted by people who expect me to feel a certain way when, in fact, I do not feel that way at all.

Much of the time, I realize that what I’m really dealing with are people’s own fears or their overwhelming desire to normalize what for them must be an unthinkable situation. What is there to do but try to be honest with them, and keep on moving? If I’ve learned anything since Galen’s death, it is simply to follow my heart, regardless of the expectations that surround me.

That, as much as anything else, is what this book is about.

Greg Gibson (GG): My name is Greg Gibson. And I’m speaking with the man who killed my son.

Wayne Lo (WL): My name is Wayne Lo. I’m sitting here with the father of Galen, whom I murdered 25 years ago.

GG: How would you describe your mental state in those days?

WL: I was disturbed. I would see things that made me think that I was on some kind of a mission from God. But I know I wasn’t, now that I look back at–

GG: Sure, but at the time that was what you felt.

WL: At the time, I felt it. So, I felt I had to do something. I was able to just take a taxi and go to the gun store. I said I want this SKS rifle. And it’s incredible how easy it was.

GG: And the same, I assume, with the ammunition.

WL: I had my mom’s credit card. The people on the phone where I ordered from, they said, “Thank you very much for your purchase. We’ll get it out as soon as we could to you.” This was the first time ever purchasing a weapon, ever using a weapon, ever firing a weapon…

WL: For just a few minutes, I destroyed so many lives.

GG: For years you were in denial about the whole episode. And then at some point, you reached out to me. You said you wanted to apologize. What changed?

WL: Someone came to me one day with a magazine here in prison. And he said, uh, “Wayne, you might wanna read this.” And in the middle of it was an article where you had an interview. And it made me realize that there’s, there are families out there.

GG: Well we sure did. This is really exhausting, isn’t it?

GG: You tell your parents that you’re having this conversation?

WL: Yes. Absolutely. I know they thank you just as much as I thank you for allowing me to, to even apologize to you. There are other families that don’t want to have anything to do with me and I totally understand that.

WL: I know that your family… perhaps they don’t agree with what you’re doing giving me the opportunity to speak. Is there ever a conflict within you that you’re doing something that might bother them?

GG: Yeah, I think it bothers my son. He just doesn’t want to have anything to do with it. He doesn’t want to talk about it. And I respect that completely. So yeah, I think they think I’m a little crazy. But they’re proud that I’m working for Galen so that people don’t have to keep doing this. I don’t think any of them would like to be here, with me, talking to you, no. And, that’s just the way, you know, that’s the way it is.