Allan Fuks is the son of Ukrainian immigrants. He grew up all over the place: in New York City and Northern California, before finally landing in suburban New Jersey. But no matter where he went, the taunting and bullying at school followed. 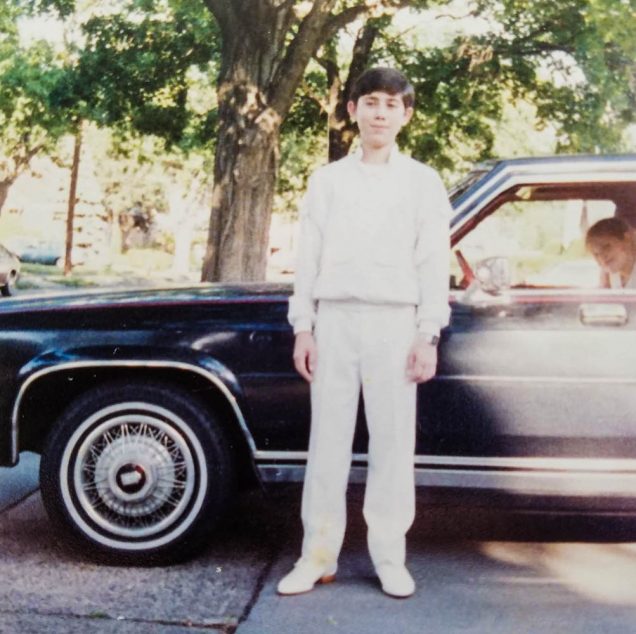 You see, Allan’s name is spelled a lot like the mother of all curse words.

He recently sat down with his middle school classmate, Spencer Katzman, to look back on their preteen years.

Top photo: Spencer Katzman and Allan Fuks at their StoryCorps interview in New York City. By Mia Warren for StoryCorps.

AF: No one really called me by my name. I was either ’The F Word,’ ’Dumbo,’ because I had like huge ears, or a combination of the two. It was like, I was walking around with an army of hecklers behind me.

SK: I grew up with a kid, his last name was Lipschitz. That one’s a softball: if your lip shits, ’What does your ass do?’

AF: I was actually jealous of Lipschitz, I was like, ’So much better.’

SK: I just felt like there was kind of this, like, baseline taunting that was always there.

AF: Right, like how do you remember the first time you saw me?

SK: You kind of stood out on the first day. You had a “Allan” gold chain, you know, across your chest. With a TV anchorman haircut —

SK: And I don’t know that I had it in me to stick up for you at that age.

AF: No one did, what are you talking about? That’s a kamikaze mission! You know, this country is so polarized, but kids of all demographics, they were united in making fun of the last name Fuks. That brought people together. I remember even, like, the kids on the lowest social rung didn’t want me sitting at their lunch table. So, I would go to the library because I didn’t want to sit alone. And I remember I read the entire Holocaust encyclopedia. I recognize now that’s kind of dark. But I was such a lonely kid that to have human contact at 12 years old, I would call the Nintendo Hotline to have someone to talk to me. I remember trying to painfully segue from a conversation about video games into just, like, ’So how’s it going in your life?’ And he’s like, ’What!?’ That’s basically my childhood.

And then around 16 years old, my parents decided to try a name change. They were like, ’You’re pale, you could be Irish.’ So they threw all these Irish names that started with “F” into a hat, and picked out Finn. And then I went to school and I was like, ’Hey guys, I’m no longer The F Word. I’m Finn now.’ They were like, ’What? What are you talking about?’

AF: No one bought it! But, you know, this past year I decided to go back to Fuks. I just got it into my head that I’m letting the bullies win. And I remember reading about this philosophy of a broken vase that you glue back together and you show proudly because the glue is now part of the art. And I’m hoping to achieve something like that in my own life, and start gluing the pieces back.