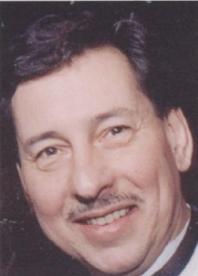 Bill Steckman (pictured at left) worked the night shift atop One World Trade Center as an engineer for NBC’s transmitter there. He was killed on September 11, 2001.

Photo courtesy of the DeVito family.

FD: We used to play Peter Pan and we used to use screwdrivers as swords. And pretend that I was like Peter Pan and he was Captain Hook. He always used to be in the garage fixing things with cousin Mikey. And he also promised that he would take me to his work once, but that’s not going to happen.

DD: I know you were young when it happened, you were only in kindergarten. Is there a time when you were most scared with all that was going on?

FD: I didn’t know that something had happened until I came into the living room and you were upset. You said that there was something wrong with Papa. And you said we were going to Nana’s house. That made me scared I remember that Mikey told me that planes crashed and he wasn’t coming back.

DD: Is there anything you did that helped you go to sleep at night?

FD: Going up to Grandma or my parents, giving them a hug, resting on their shoulder. And sometimes when I was in my room, I would pretend that Grandpa was right there and nothing was wrong. And my teddy was right there, so that helped me.

DD: Do you think you are different now that you’ve lost Papa?

FD: Yeah I think I’m different, because being in certain places, when I’m at a happy time, just somewhere in my mind, he just won’t get out of my mind, he’s just stuck in my mind and that makes me a little sadder where I am. And I have dreams of him. I always imagine being with each other again and being real happy as a family, without being sad or anything on September 11th.

DD: If you could talk to him right now what would you say?

FD: I love you and there is no other grandfather that I would rather see than you.