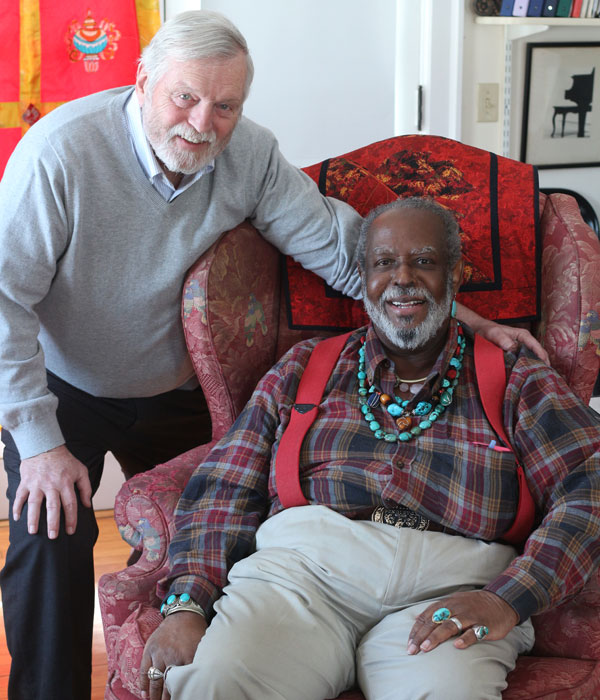 FC: Fred came to me and said, “I have this idea…you could be a police officer.” That kind of stopped me in my tracks. I grew up in the ghetto. I did not have a positive opinion of police officers. Policeman were sicking police dogs and water hoses on people. And I really had a hard time putting myself in that role. So I was not excited about being Officer Clemmons at all. There was one particular scene that Fred and I did, where he had his feet resting in this plastic pool on a hot day.

FC: And he invited me to come over and to rest my feet in the water with him.

FC: The icon Fred Rogers, not only was showing my brown skin in the tub with his white skin as two friends, but as I was getting out of that tub he was helping me dry my feet.

There, that one’s dry. Thank you.

FC: And so that scene touched me in a way that I was not prepared.

Sometimes just a minute like this, will really make a difference.

FC: I think he was making a very strong statement. That was his way. I still was not convinced that Officer Clemmons could have a positive influence in the neighborhood and in the real world neighborhood, but I think I was proven wrong.

KL: You were on Mister Rogers’ Neighborhood for a long time…

FC: Yeah, I discovered a friend for life. I’ll never forget one day I was watching him film a session. And you know how at the end of the program he takes his sneakers off, hangs up his sweater and he says, “You make every day a special day just by being you, and I like you just the way you are?” I was looking at him when he was saying that, and he walks over to where I was standing. And I said, “Fred were you talking to me?” And he said, “Yes, I have been talking to you for years. But you heard me today.” It was like telling me I’m OK as a human being. That was one of the most meaningful experiences I’d ever had.

I’m so proud of you, Francois. Oh, thank you, Fred. Do you have time to give a song to my friend and me? I sure do. [François singing “There are many ways to say I love you…”]