When Mary Johnson’s teenage son was killed, she never thought she’d end up living next door to his murderer. We heard about that journey in an interview from 2011 between Mary and Oshea Israel, the man who murdered her son.

Mary went on to found From Death To Life, a support group for mothers who have lost their children to violence, and to speak publicly about her loss in local churches. That’s where she met another man with whom she would develop a deep bond: her husband, Ed Roy. 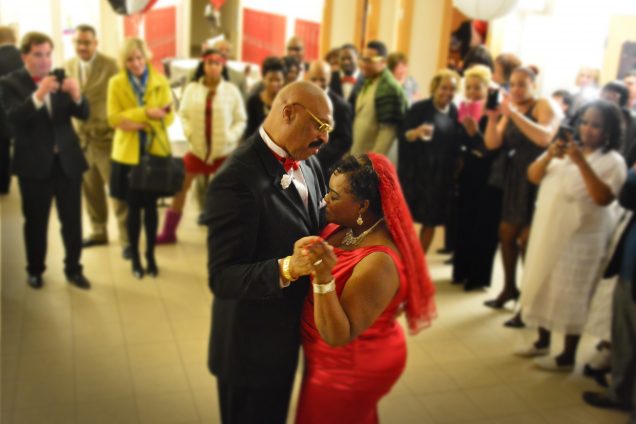 When they met, Ed was still suffering from the loss of his only son, Mandel Roy, who had also been murdered. At StoryCorps, Mary and Ed talked about sharing in each other’s pain and going on with life after a tragedy.

Mary and Ed were married on January 3, 2015, with Oshea Israel serving as one of their groomsmen.

Bottom photo: Mary and Ed’s first dance at their wedding.

Mary Johnson-Roy (MJR): How did you and I meet?

Ed Roy (ER): We met when my first-born and my one and only son was murdered. And a couple of my daughters had asked me to go to the church to hear you speak. I wasn’t ready for the forgiveness part, but I was at a loss. Like I shared with you, I thought God took my boy and was punishing me for my own crimes. I had joined the gangs early and pulled my first armed robbery at 11 years old. But with you being there, I saw hope. You took me under your wing; that’s why I called you my angel.

MJR: We also had Oshea in our wedding because he is my spiritual son.

MJR: And I know you take care of me when I’m not doing well. And I’m grateful to have someone there that has experienced the same thing that I have. The anniversary’s coming up of my son’s murder — February 12th.

ER: That empty hole’s always going to be there in our hearts. But I feel like when we together and we able to listen to one another’s heartbeats, it says a lot.

MJR: I’m thankful. I really am. You’re a good man.