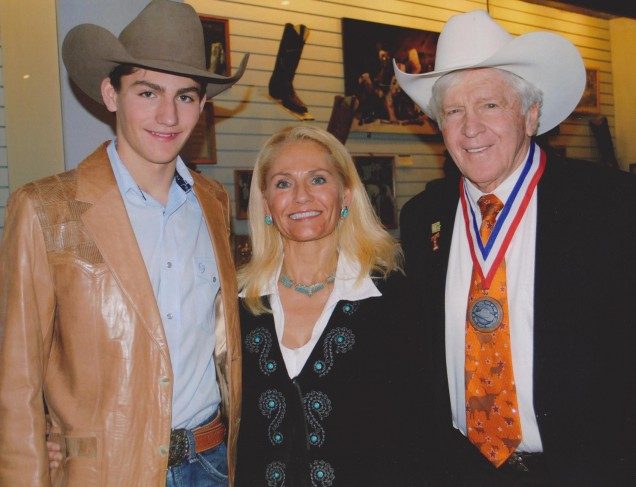 In 1957, Dean Smith left Texas and headed for Hollywood.

For the next 40 years, he spent his time working as a stuntman in films, including Oscar-winning Westerns like True Grit, How the West Was Won and The Alamo. (Dean is pictured above on the set of The Alamo with legendary movie star John Wayne).

The three of them came to StoryCorps so that he could share memories from his storied career.

Photos courtesy of the Wayne Family.

DS: I didn’t want to be an actor just to be a dramatic actor. Getting into some kind of dramatic mood, that didn’t seem to fit me too damn much. I’d either have to go out and fall off a horse or do a stunt fight. I broke a couple ribs here, I’ve had bruises. I lived pretty dangerously for 35 or 40 years there.

FS: What is the craziest thing you had to do?

DS: Probably getting the job. When I got into the movie business in 1957, I was able to make all the leading men look good. I even made a couple of girls look good too! One time, I doubled Maureen O’Hara. I got the clothes and I got this big red wig. When I got back on the set they laughed at me and they said my legs didn’t look too much like Maureen’s. Now everything can’t be all autographs and sunglasses. Now that I’m 81 and a half years old, all of my friends are mostly gone. Guys like Roy Rogers and Gene Autry and John Wayne, all these guys, well, they were like my relatives! And then I woke up one morning and they had all gone. Now I live on this farm where I was raised. It’s not the biggest ranch in Texas but it’s a piece of dirt that I’m sure proud of. And when I die I’ll never be able to get all this dirt in that casket with me.

DS: I’d like to be remembered as the cowboy that could ride, run and jump with anybody in the world. I’d like to do it again! Now that’s what I’d like.