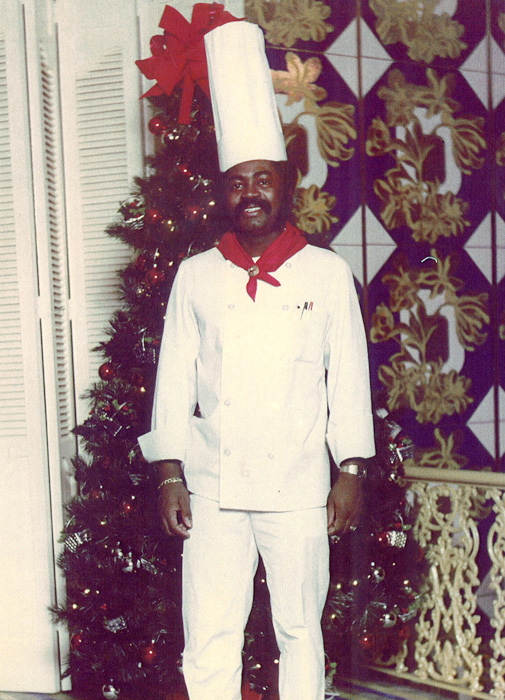 CS: My father had a heart attack. We were like 13 years old and my mother said, ”You can’t go back to school, you’re going to have to find a job.” So I went to the country club. And I always wanted to go up to the kitchen and wash dishes because it was really fascinating to see those guys cooking. So I made up my mind that I was going to be a chef. All my friends told me I was crazy but I saw something that no one else could see, and that is me walking around with that big tall hat on. So I counted how many positions it was from washing dishes to the executive chef. And we had like a three room house. So what I did, I had my chart pinned to the wall in our little outdoor bathroom there and I would mark every time I got a promotion, And then I would turn the light off and I would dance. And I would sing ”Johnny B. Goode” and I changed it to ”Clayton B. Goode, you’re so good.” You know I didn’t mind all the hard work–actually I loved it. I worked the whole weekend without going home. And I worked myself up to sous-chef, and there was this guy named Frank Cahey who was executive chef. He told me one day, he said, ”I know what you’re trying to do. You think you’re going to be the chef here.” He said, ”But I’m going to be here for life.” He said ”You might as well either keep working under me or go somewhere else.” So what I did, I was sneaky. You know in the back of trade magazines there are articles in there looking for chefs all over the country. I wrote one of the best looking resumes and signed Frank Cahey’s name on it, and sent it to all of these head hunters all over the country. And he actually thought he was famous, he said everybody knows about him. But he didn’t know it was me that did it. And the general manager got tired of it. He’s like, ”Frank, every time you come to me for raises, and people want you here, people want you there.” He said, ”Right now, at this very moment, I consider you dead.” Frank, he turned white as a sheet and he said, ”Well what are you going to do?” He said, ”Well Clayton, can you take care of it until we find another chef?” I said ”I’ll be more than happy to.” That’s all I needed. I never even looked back.