Charles Jones was already a father to three daughters when he found out his fourth child was going to be a boy. He was so excited by the news that even before Malik was born, 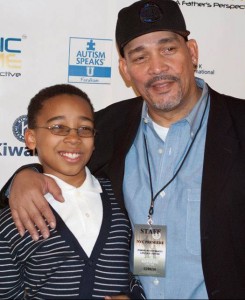 Charles began plotting ways he would get the new baby into playing and loving sports—the same way his own father had done with him—even joking to others that he had already bought him New York Knicks season tickets.

When Malik was two and a half years old, he was diagnosed with an autism spectrum disorder. Like many parents of children on the autistic spectrum, Charles and his wife struggled to adjust to their son’s unexpected needs, but over time, they worked together to better understand autism and Malik. Early on, Charles feared his son would be non-verbal, unable to even speak his own name or say, “I love you,” but eventually Malik, now 12 (pictured with his father at left), 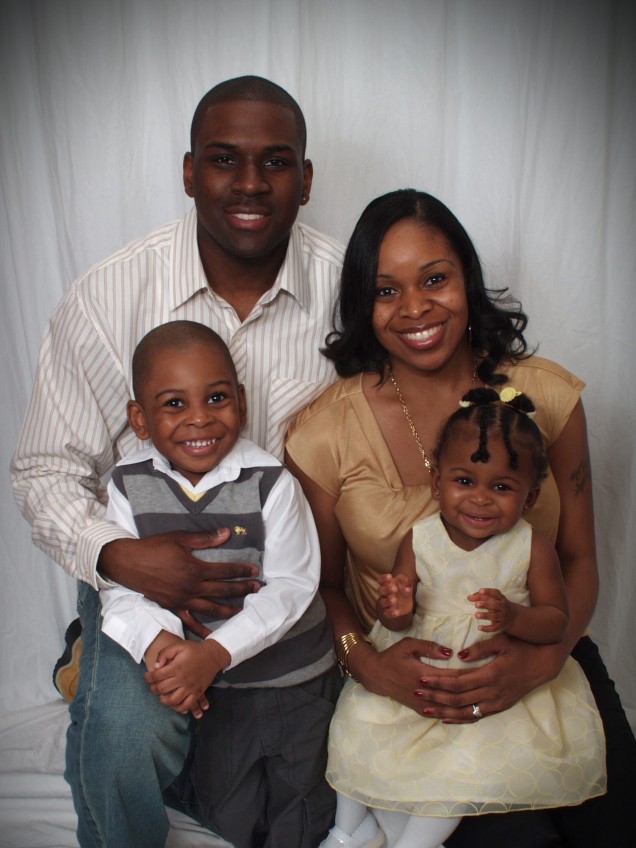 began talking, and according to his father, once he did, “He wouldn’t shut up.”

Charles decided to start a support group for fathers like himself to provide a space for them to feel safe sharing their feelings. Five years ago, at a New York Mets game on Autism Awareness Day, Charles met Anthony Merkerson. Anthony has two children—Elijah, 10, and Amaya, 8 (pictured with his family at left)—who are both on the autistic spectrum. After meeting Charles, Anthony joined the support group and they have since become close friends.

Charles (above right), a filmmaker, came to StoryCorps with Anthony (above left), a New York City Metropolitan Transit Authority police officer, to talk about what they have learned from one another, and the concerns they have for their sons as young black men growing up in a society where they are at constant risk of being targeted and misunderstood because they are autistic.

AM: How did you feel when you learned that Malik had autism?

CJ: It was like a shot in the gut. I thought my son would be non-verbal, that he would never say I love you, but when he started talking he wouldn’t shut up.

AM: What’s the hardest day you’ve had with Malik?

CJ: It’s not his bad days that are hard, it’s my bad days that are hard. I remember when I started cutting his hair, I know the sound of that metal grinding scares him, and he’s fighting me. I got so frustrated, and I forced him, like I held his head, and I could see it hurting him. And then afterwards I broke down and then he came to me and he says, “Dad, don’t worry about it, I’ll be okay next time.” It was a stain on my brain for a long time. And I’m working on it. I’m a work in progress.

AM: I’ve learned, like patience, you’ve got to have it. In the beginning, just with my son was tough. Now you fast forward to having my daughter. And when she’s two, she gets diagnosed. Two kids on the spectrum. It’s like a heavy load, like picking up a mountain. And back then, I was in a shell, I wasn’t even explaining how I was feeling.Then there happened to be an autism event, and I seen you there with Malik. That was the first time we met.

AM: After that it’s been totally different. Just the fact that you’re not alone dealing with this. That right there changed my life, period. How do you think people see your son?

CJ: Yeah, he’s huge. And when he gets excited, he flaps his hands really hard–this is not abnormal, this is as normal as rain for him.

CJ: But my fear for him has been that somebody sees him, and they interpret his body language as something that it’s not. So even with a smile on his face he’s going to be threatening to people.

So let me ask you, Anthony, um, as a police officer, do you have concerns for my son?

CJ: That’s why the best thing I can do is teach him what’s socially acceptable, and what can be misperceived as a problem. I hate to have to teach him those things, and I don’t want to take his innocence away either, but in time he’ll know. And you know what? Who he is today, I never thought he’d be, so I know there’s possibilities for him.