In her early 50s, Carolyn Shoemaker began a career in astronomy. While she had no formal training, she did have the support and encouragement of her husband, Eugene “Gene” Shoemaker. 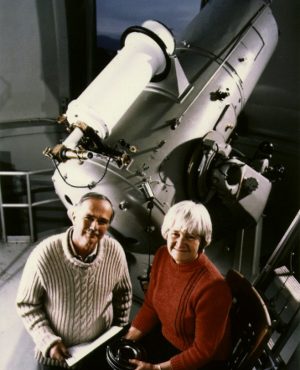 Gene was a renowned astrogeologist and one of the founders of the field of planetary science, which studies the geology of planets, asteroids, and other celestial bodies in our solar system.

Together they worked side-by-side for 17 years, taking pictures of the night sky in search of comets and asteroids, and in 1993, along with astronomer David Levy, they made their most significant discovery—Comet Shoemaker-Levy 9. In 1994, Comet Shoemaker-Levy 9, which had broken apart, slammed into Jupiter offering astronomers around the world their first opportunity to see the effects of two solar system bodies colliding.

In total, over the course of her career, Carolyn is credited with discovering more than 800 asteroids and 32 comets.

In 1997, while on an annual field trip to Australia, the car Carolyn and Gene were in was in a head-on collision with another vehicle. Gene died from the accident, and while Carolyn was still in the hospital recovering from her injuries, one of his former students, 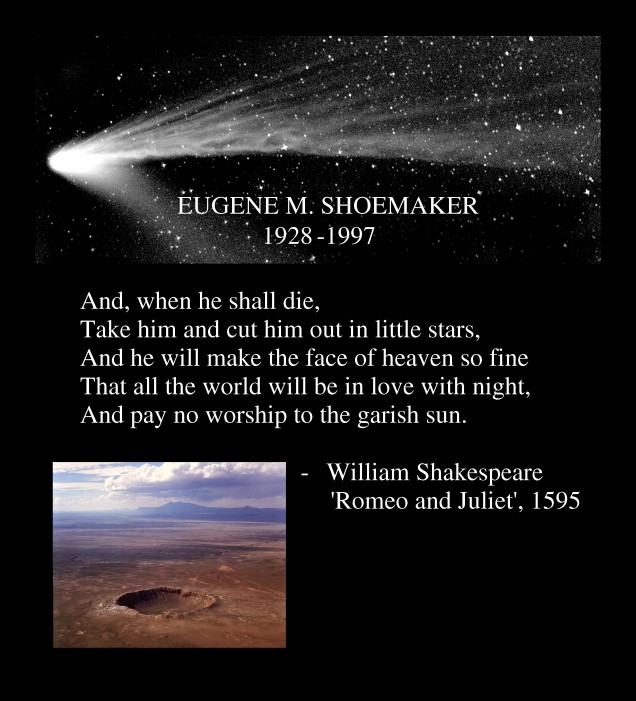 Dr. Carolyn Porco, contacted her to see what she thought of having Gene’s ashes put on the Moon. Carolyn enthusiastically agreed to the idea and with the help of people Dr. Porco knew at NASA, arrangements were made for his cremated remains to go into space as part of the Lunar Prospector mission in January 1998.

To this day, Gene is the only person whose ashes have been placed on the Moon.

Carolyn continued her work as an astronomer following Gene’s death and has been awarded an honorary doctorate from Northern Arizona University in Flagstaff, and received both the Rittenhouse Medal for outstanding achievement in astronomy, and the NASA Exceptional Scientific Achievement Medal.

At StoryCorps, she talked with her son-in-law, Phred Salazar (pictured in the player above), about working closely with her husband and her decision to make the Moon his final resting place.

Top photo: Eugene and Carolyn Shoemaker in 1986 sitting in front of an an 18-inch Schmidt telescope photographed by Jonathan Blair. Photo courtesy of J.Blair/USGS.

CS: When I was 50 years old, and my kids were grown, Gene suggested, “Well, maybe I would like to try my hand at astronomy a little bit.”

I’d never stayed awake a whole night in my life.

CS: The idea of going to the telescope seemed kind of impossible.

And then, Gene and I were on a field trip in Australia. We were rounding a curve, came face-to-face with another vehicle.  It was immediate impact. I couldn’t move and I kept thinking, “Well, Gene will come around in a minute like he always does and he’ll, open the door and get me out of here.”

But he didn’t come.

Gene and I had never talked about what should happen to us when we died, but I was still in the hospital, and here was a phone call from Carolyn Porco.

CS: Yes. Carolyn told me that the spacecraft Lunar Prospector was about to go to the Moon.  She hated to bring it up too abruptly, but would I consider having Gene’s ashes go in a capsule on the rocket.

It was an easy decision. He always wanted to be on the Moon. And so I knew that Gene would be just elated if he could go to the Moon … at last.

I miss him every day. But to this day, you know, I look up at the Moon and I can imagine him up there running around looking at craters.

Just knowing his joy in it …