For an American history project during his junior year of high school in 1958, Bob Heft created a 50-star flag. The only problem was that at the time there were only 48 states. Bob had a hunch that two more states would be added and in 1959, Alaska and Hawaii became our 49th and 50th states. 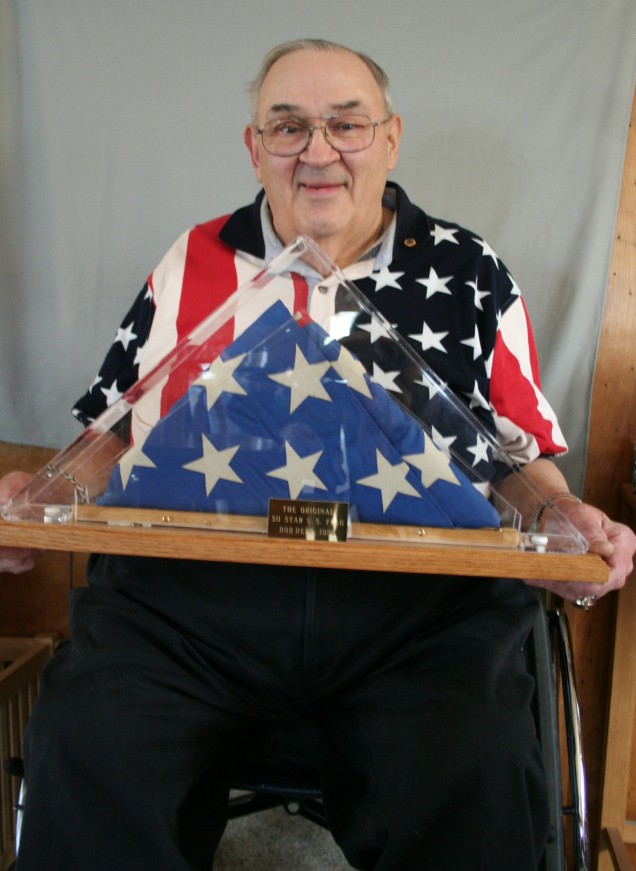 Bob created the 50-star flag by cutting up a 48-star flag his parents had received as a wedding present. “I’d watch my mom sew, but I had never sewn…and since making the flag of our country, I’ve never sewn again.” Bob’s teacher was unimpressed and gave him a B- asking if he even knew how many states we had, and telling him, “If you don’t like the grade, get it accepted in Washington then come back and see me.”

Two years later his perseverance paid off when he received a call from President Dwight D. Eisenhower who invited him to Washington, D.C., for a ceremony adopting his 50-star flag. Bob’s teacher also went back and changed his grade to an A.

Bob later became a high school teacher, college professor, and served as mayor of Napoleon, Ohio, before he died in December 2009 at the age of 68.

BH: In American History Class, we had to do an outside-of-class project. We could make or do whatever we wanted, like a science fair or something like that — you bring the project in.

The Betsy Ross story intrigued me. My mom and dad, they had a 48-star flag they received as a wedding present, which of course meant a lot to them. Well, I took a scissors and cut it up.

So anyhow, we get to class: I had my flag on the teacher’s desk.

The teacher said, ”what’s this thing on my desk?”

And so I got up and I approached the desk and my knees were knocking.

He said, ”why you got too many stars? You don’t even know how many states we have.”

And he gave me a grade of a B-minus. Now a B-minus ain’t that bad of a grade. However, a friend of mine, Jim, he’d picked up five leaves off the ground — he’s taping these leaves down to the notebook and labeling them elm, hickory, maple — and the teacher gave him the grade of an A.

I was really — I was upset.

The teacher said ”if you don’t like the grade, get it accepted in Washington. Then come back and see me. I might consider changing the grade.”

Two years later: I had written 21 letters to the White House. Made 18 phone calls. Now, you can imagine when my mom got the phone bill:

So anyhow, I got this call, and it said, now, ”the President of the United States is calling you later on today.”

Well at that time Eisenhower was president, and he comes on the phone and he says ”is this Robert G. Heft?”

And he said ”I want to know the possibility of you coming to Washington, D.C., on July 4th for the official adoption of the new flag.”

And so I have the grade book. It’s encased in plastic; it’s kept in a bank.