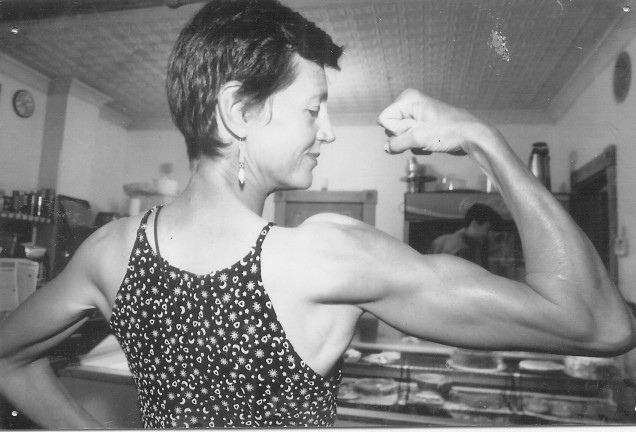 BM: Right out of High School I worked in a office, but a couple hours behind a desk and I was falling asleep. So I became a bricklayer.

OF: Well I specifically remember getting bullied at school and telling boys that were bullying me, ”You better watch out, my mom’s a bricklayer and she’ll come beat you up if you mess with me.” (Laughter)

BM: Well it was kind of rough at first ‘cause, you know, a lot of the older guys, didn’t think I should be there and I was taking a job from a man. But I believed that I could do that job. And I was working with this guy Tony Anello, who was a WWII vet, and he had a plate in his head. And he was, you know, really old school guy, but he was willing to work with me when a lot of other people did not want me as their partner. And, uh, when he passed away his daughter called me and said that he wanted to leave me his tools. So that, I think that’s probably – if you’re getting tools from the bricklayers that have gone before you that would be a sign of respect.

OF: I can’t even really remember a time that you came home and you said, ”Ugh, I’m gonna quit,” or, ”This is too hard.” And I, at a very young age, learned how to massage your calloused hands, and then a little later on in life sometimes I would paint your fingernails …

BM: Not that a manicure lasted very long. (Laughter)

OF: I noticed that throughout my life people always come up to me on the street and say, “Are you Barbara Moore’s daughter?” There’s a lot of people in this town that have a great respect for you, and you’ve earned that. BM: Well you’re very kind. (Laughter)

OF: Well how would you like to be remembered?

BM: The only thing that’s important to me, my dear, is that you remember me.

OF: But you’ve had your hands in so many things that will last for so much longer than either one of us.

BM: I know, I don’t care about that. Whatever I did I was always something that I wanted to do for you.