Anthony D’Andrea rarely attended ballgames as a kid because he didn’t have the money for a ticket. 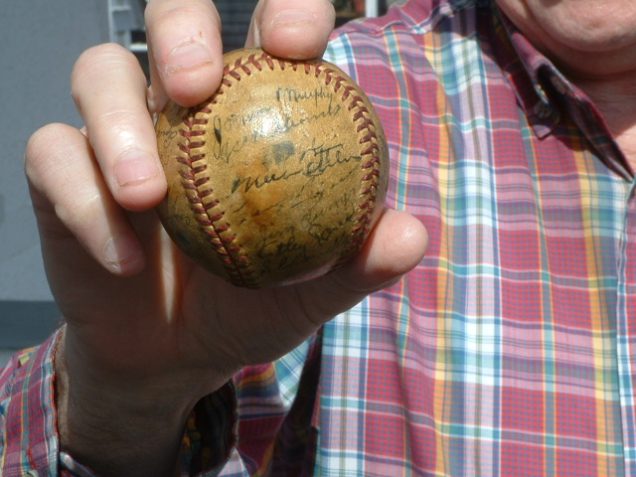 But that didn’t keep him from hanging around Yankee Stadium—especially during the summer when he would try to collect autographs.

In 1943, as the Yankees were on a quest for a World Series title, D’Andrea went on a quest of his own, to getting the entire team to sign his baseball.

At StoryCorps he tells his daughters, Mary (left) and Monica (right), about his younger days autograph hunting in the Bronx.

AD: As a youngster I rarely went to a ballgame, because we never had any money to do that. But in the summertime I would go down pretty much every day to get autographs.

MD: And is it true that the players used to get there by the subway?

AD: Yeah. We’d wait by the subway stop so you could see them coming readily. And you could spot the players for two reasons. One of which, all the Yankee players had to wear jackets, ties, shirts. And second reason is for 25 cents, you got a book called Who’s Who in Baseball and it had pictures of most of the team.

One of the Yankee heroes at the time was a fellow named Charlie Keller. And I had gotten his autograph on a number of occasions. But you always got another one because, you know, you could trade and things like that. And the famous remark he made to me one time was, I ran up to him and I said, Mr. Keller, would you sign this? And he said, Freckles   I had a lot of freckles at the time he said, Freckles, how many times you want my signature? I said, I don’t know. And he said, All right. [laughs]

MM: Now, tell us a little bit you have a ball

AD: Well, I started getting people to sign it; and the ball was filling up pretty well. And my father used to get the Daily News every morning. And this one day I noticed that it said, Next Tuesday is an off day but the Yankees are gonna have a workout. So I thought, Oh good that’d be a good day to go because there won’t be as many kids around and maybe I can get the fellas that I didn’t get. You know, because a lot of times the players wouldn’t sign if there’s like 30 or 40 kids after them so they, you know they just brush you off.

I got down there early and I realized I was lacking two signatures to have the whole team. And one of the people was the Yankee manager, very renowned man, Joe McCarthy. And sure enough he comes out and I ask him, Mr. McCarthy would you sign the ball? I just need your signature and maybe one other. And he didn’t say much. He signed the ball.

So now I’m down to one who was a reserve catcher. His name was Rollie Hemsley. So I waited and waited and I thought, Could he have gotten by me? I didn’t see him come in. And it started to get late and I thought, Well, gee, I really should go home.

Well, sure enough he comes out. And I ran up to him and said Mr. Hemsley will you sign my ball? He said, Get out of here kid. I said Aw, come on youre the only one… if you sign I’ll have everyone on the team. He said, Get outta here kid. So I just followed him. And I kept asking him.

MM: Now were you scared of him at all?

AD: The funny part is I was a pretty timid kid, but I wasn’t afraid of him. I just kept saying, Oh come on. Can’t you sign the ball? And, you know, he says, All right, gimme the ball. And he signed it. And that was that. And sure enough it was the 43 Yankees world championship team.