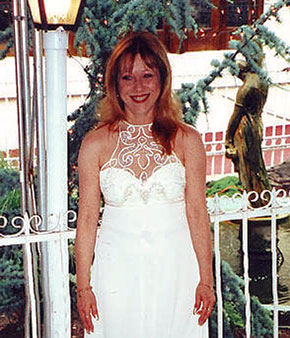 Jeanette LaFond-Menichino worked on the 94th floor in the North Tower of the World Trade Center. With little higher education, she managed to work her way up to Senior Account Analyst at Guy Carpenter, a subsidiary of Marsh McLennan.

Her sister, Anita LaFond-Korsonsky, and her mother, Dina LaFond, came to StoryCorps to remember Jeannette’s determination

Dina leads tours for visitors to Ground Zero and says that the experience has helped in her grieving process. Anita has never revisited the site of the Twin Towers. Instead, she prefers to look out towards Manhattan from across the water at Eagle Rock Reservation’s 9/11 memorial, where she leaves cards and flowers for her sister.

AK: We used to call her pigeon because she was small and she had the blonde hair and the blue eyes. I mean, she was really cute!

DL: And she was a neat dresser. She used to know how to put colors together and she knew jewelry from head to foot, from A to Z, you know?

DL: Anything that went into her hands she made it artistic and…She worked on the 94th floor. She would go to work early in the morning and when the sun came up she would take pictures of the colors of the sun, the pink, yellow, orange. She also said that being up so high, sometimes the clouds would come right up to her window.

AK: I think the thing about losing her is that, I never expected to lose her at this point in our lives. All of a sudden in my early 50s I became an only child.

DL: There are times when I go outside and I see somebody with long blonde hair that might be he–

DL: –you know. Uh, it’s a continuous heartache. And when I used to close my eyes I would have the two towers, one in each eye, and I could never close my eyes because I would see those twin towers.

DL: And it took me months before that picture went off my mind.