On September 11th 2001, a man with a red bandana made his way up and down the South Tower of the World Trade Center three times, helping at least 18 people get out of the building. 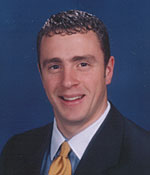 His name was Welles Remy Crowther (pictured left), a 24-year-old equities trader for Sandler O’Neill and Partner on the 104th floor. Like his dad, he was a volunteer fireman and he dreamed of one day joining the fire department.

Welles’ body was recovered on March 19, 2002 on the ground floor lobby, right beside the FDNY’s control center. His last contact with his parents was a voicemail he left for his mother, “Mom, this is Welles. I want you to know that I’m ok.”

His parents, Alison and Jefferson Crowther, came to StoryCorps to remember their son.

AC: Oh, he was a high adventurer. (Laughter) He was…

AC: High energy. He would love to jump off of heights. He loved bungee jumping. He got me to bungee jump. (Laughter). I think he was very proud of me for going off. But I did it.

AC: His father, he knew better, but me…He always was always getting me into it.

JC: We took–this was before our third child was born–we took the two older ones, Welles and his sister Honor, down to Disney World. Welles was 5 and Honor was 3. At that time they didn’t have all these other wonderful rides, but they had Space Mountain. We got on Space Mountain, we got in this car, and it’s just the 4 of us. And Welles was right up front, and I’m right behind him. And this thing just takes off into the dark, and we’re whipping around. And Welles, I could sense, he was just, he was just vibrating.

JC: So happy and thrilled to be on this thing. When we got to the bottom all Welles could say was ”Again! Again!”

JC: So I had to take him and the 2 of us rode that darn thing again.

AC: On a Tuesday.