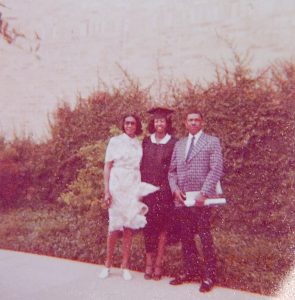 Nelva Williamson grew up in one of the only Black families in their small town, where her mother spent 52 years as a teacher.

But still, Nelva didn’t think she’d end up in the classroom.

Here, she tells her son Timothy Harris, about how her lifelong love of learning began.

NW: When I was little, my dad called me professor.

I remember I wanted to read the high school books when I was in grammar school, but the librarian was like, ‘You’re not old enough. You have to read all the books in the elementary room before you could go to the middle school room.’ And I powered through those two rooms just so I could read The Lord of the Rings.

I had been living this carefree life, but when Dr. King was assassinated, I believe I was 11 years old. It made me want to study more and more about Black history to prove to myself our worth.

And when I grew up, I thought I wanted to be a lawyer. I had this plan where I thought I would teach for seven years and then go to law school. But I remember a sixth grader saw me studying and she said, ‘I want to read big books like that. What is that big book about?’ And I told her it was a law book. And she said, ‘Mmm, I think you’d make a better teacher than a lawyer.’

Well, eventually that student became a lawyer. And just the thought of it makes me cry because I had influenced her to do something that she wound up loving. And I stayed in the classroom and found my true love of teaching.

It’s especially important for me, topics that in the state of Texas, I’m not supposed to teach. Like just recently we talked about Juneteenth and its connection to Houston. And the students were like, ‘Why hasn’t anyone ever told us this before?’

When we take out big chunks of history, that diminishment diminishes us.

You know, my grandmother was a quilter, and she put scraps together into these beautiful patterns. And I feel that I’m doing that, but with history.