John Torres Sr. grew up in the Bronx and fell in love with Lucha Libre, the freestyle wrestling popular in Mexico.

He found fellow enthusiasts at the Bronx Wrestling Federation, where a motley crew of men — plumbers, lawyers and police officers — moonlit as Lucha Libre showmen. 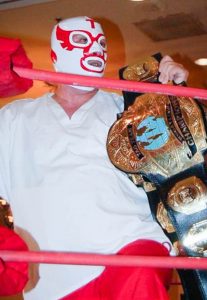 John joined their ranks and quickly became a star in the city. But his biggest fan was his son: John Torres Jr.

John Torres Jr. came to StoryCorps with his dad’s best friend and fellow wrestler, Abraham Guzman, to remember John Sr., who died in 2011.

Bottom photo: John Torres Sr., who wrestled as The Falcon, is pictured at a wrestling match in 2010. Courtesy of John Torres Jr.

JT: My dad, he would always tell me to put him in a chokehold, and he would easily break it. And I was always so impressed by that strength. He was my hero, man.

I remember he had the white boots, the white mask, with kind of like a red beak.

JT: He was ”The Falcon”, yes. And my dad was a neat freak. So he’d fold things a certain way. And everything was in this giant gym bag. And every day I would look at that bag and say, ‘Man, there’s stardom in that bag!’ But he would discourage me when I was young. He always said, ‘You can be something better than that. Doctor, lawyer.’

And then, our relationship collided. There was a lot of absences from him, growing up. But the thing that always brought us back was wrestling. Over the phone we would talk about wrestling for like, hours.

And I remember he said, ‘I want to tag team with you one day.’ And so you started training me.

AG: I learned that you wanted to start wrestling. So I said, ‘Well let’s see what I could do.’

JT: And I trained almost every day. I told my dad. And he said, ‘I’ll be there Saturday for your debut match.’ That Thursday, I get a phone call from my cousin. And he’s like, ‘Did you hear?’ and I was like, ‘No, what?’ And he was like, ‘Your father.’ And when he said, ‘My father,’ I already knew. And I said, ‘My dad died?’ and he could barely say ‘Yeah’ over the phone. I remember leaning against the wall, and just breaking down crying.

And on the day of my debut, I was at the cemetery burying my dad. And that’s when I decided that wrestling was my legacy.

One of the things I think about, if he was still alive today, like how would he feel?

AG: I think he would be proud. Because I see a lot in you in him. Your certain wrestling moves, I’m like, ’I’ve seen that before. ’And sometimes, when I talk to you I feel like I’m talking to your dad again. Even the laugh. People don’t know it –

AG: — but when you laugh, I hear him all the time!

JT: You know, I want to keep his name alive. And that’s what I’ve been doing ever since.