To kick off the new year, on this episode of the StoryCorps podcast, we’re celebrating change; specifically, job changes.

We’re starting off with Drew Lanham. Growing up, Drew was always fascinated by the birds on and around his family’s farm in South Carolina. After an unfulfilling career in engineering, he decided a change of pace was in order and pivoted to the calling that he always felt inside. Today, Drew is a zoologist and ornithologist, and spends many of his days in the company of birds.

At StoryCorps, he spoke with his friend John Lane about the childhood that helped his career take flight. 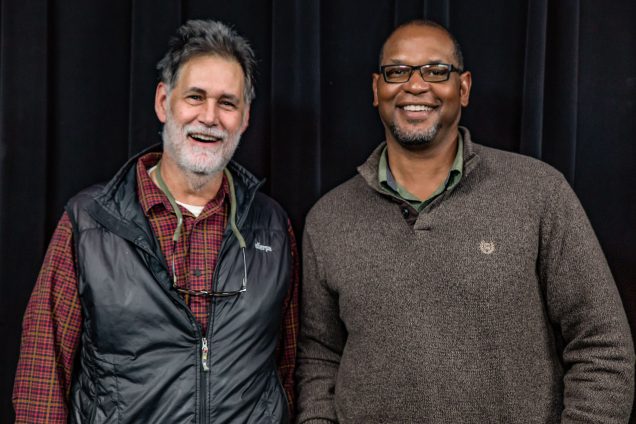 Photo: Drew Lanham (right) and John Lane at their StoryCorps interview in Clemson, South Carolina on December 9, 2019.  By Eric Rodgers for StoryCorps.

Next, we hear from Barbara Abelhauser. For 14 years, Barb got up each day and went to work in an office. But she hated her job, and finally, one day she quit, reasoning, “I could get hit by a bus tomorrow. And if that happens, I want to have woken up that day and not thought, I don’t want to go to work.”

So Barb decided to become a bridgetender. Sitting in a booth over the Ortega River in Jacksonville, Florida, she opened and closed the bridge to allow boats to pass from one side to the other. Much smaller than her previous office, but with windows surrounding her, she had “the most gorgeous view in the entire city.” 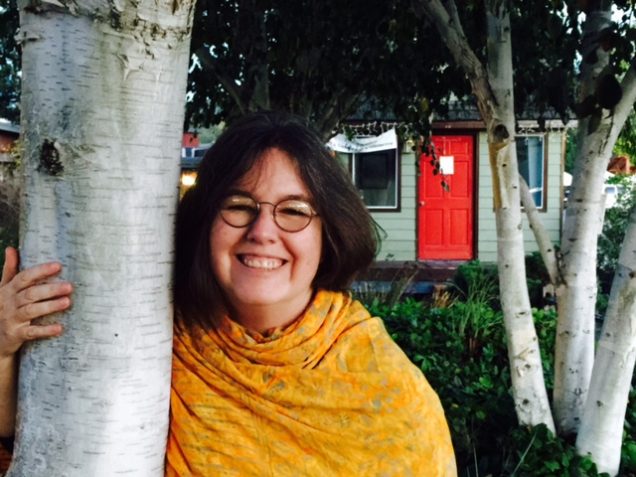 Barb didn’t expect to be a bridgetender for long, but for the next 14 years, she watched the sun rise and set on the river from her new perch. She now documents her observations and experiences on her blog, “The View from a Drawbridge.” In 2014, Barb left Jacksonville and moved to Seattle, Washington, where she continues her work as a bridgetender.

Note: In this piece we say that Barb was 51 when she quit her job. She was actually 36.

Now that 2020’s behind us, we’re embracing the new year. So we’re celebrating other moments when change was welcomed, and even desired.

We’re going to hear from two people who made big changes later in life… both around their careers.

For Drew Lanham, the shift was inspired by his childhood. In 2019, he spoke with his friend John Lane about how growing up on his family farm in South Carolina helped him find his calling.

Drew Lanham (DL): My grandfather began to build the farm in the 1920s, and my father saw it as a responsibility to stay on the home place. He didn’t leave the soil. And I saw the land as my father’s heart.

My grandmother, she would stand on her front porch and she could holler, literally, from across the pasture, across the holler. That’s what I always thought that holler meant (laughs). I didn’t know it was a geographical thing.

Going back and forth between my grandparents’ house and my parents’ house, I would stop to investigate whirligig beetles, and Bobwhite quail were usually in some thicket somewhere along the way. It might take me a couple of hours to walk that. It seemed like a thousand miles.

John Lane (JL): How far literally was it?

DL: Less than a quarter of a mile.

DL: Once I left for college, everybody said, ”You’re good at math and science. Be an engineer. Make money, Drew.” So I tried that, but hated every last moment of it.

Dad was 52 when he died of a heart attack. There were arguments about what would happen on the land, and I can remember coming back home. All of these wonderful forests that I’d grown up in had been clear cut. And losing that land was like losing my father all over again.

I never believed that I should be an engineer. That bird was really sort of my canary in the (laughs) coalmine. I said, ”I can’t do this anymore,” and went back to my apartment.

JL: Dark night of the soul…

DL: (laughs) I got a big bowl of Froot Loops and thought about the next steps.

I remember first going out to study these Easten bluebirds, and the work was often hot and long hours, but there were these moments when I would look up and there would be flocks of Bobolinks or the songs of meadowlarks, and taking the moment to realize that I was doing what I had always dreamed.

From a very early age I believed that I would be someone who… who studied birds–who somehow found a way to fly. And so, I would like to think that my father would see my turn towards the study of nature as carrying a legacy forward.

After the break, a job that many of us never even knew existed, full of literal ups and downs. Stay with us.

Our next story comes from Jacksonville, Florida. That’s where Barb Ablehauser found her calling.

She had spent most of her life working in an office. But when she was 51 she decided to trade in her cubicle for a job that came with a view.

In 2009, Barb came into one of our MobileBooths with her friend John Maycumber. She told him about why she wanted to spend the rest of her days as a bridgetender.

Barb Abelhauser (BA): The pay’s horrible, the benefits are worse, but I have the most gorgeous view in the entire city. I mean, executives who make hundreds of thousands of dollars do not have my view. And I’m getting paid to stop and look. That’s the thing I think I love the most about this.

John Maycumber (JM): You must see a lot of things that the rest of us miss.

BA: You know, I think about that a lot because I’ve been sitting in the same exact spot for all these years and I see the passage of the seasons. I see the alligator that hangs out below my window and, when she lays her eggs, I hear baby gators barking.

And people don’t even realize we’re there. They’ll walk past us and say the most intimate, private things and we hear them. People go on dates on these bridges and they propose. So you get this little tiny snapshot of people’s personal lives that they don’t even realize that they’re giving you.

There was a fisherman that used to come through the bridge every morning like clockwork. I never knew his name. You know, we had a connection, but we don’t really know who each other is. And one day, he came through and I waved. And I found out in the news that maybe 10 minutes later, while he was on his boat heading out to fish, he had a heart attack and passed away. His boat washed up on the shore of the river. He was on the boat alone. So I was the last person that saw him alive. It makes you think. It makes you appreciate.

You know, I’ll be out there at 3 in the morning, there’s no traffic, it’s quiet. And I’ll look up and there’s the moon. And I try to thank the universe at least once a night for this opportunity. You know, I could get hit by a bus tomorrow. And if that happens, I want to have woken up that day and not thought, I don’t want to go to work. [Laughs] You know? Most people don’t have that. I love it.

KK: That’s Barb Ablehauser speaking with her friend, John Maycumber. In 2014 Barb moved to Seattle where she became a bridge operator for the department of transportation.

From bird-watching to people-watching, that’s all for this episode of the StoryCorps podcast.

To see animated versions of both of these interviews, head to StoryCorps – dot – org. While you’re there you can also see the music we used in this episode along with original artwork created by Lindsay Mound.

This episode was produced by me and Sylvie Lubow. Jud Esty-Kendall is our editor. Jarrett Floyd is our technical director, and wrote our theme song. Natsumi Ajisaka is our fact-checker. Special thanks to Jasmyn Morris, Aisha Turner and Lilly Sullivan.

For the StoryCorps podcast, I’m Kamilah Kashanie. Catch you next week