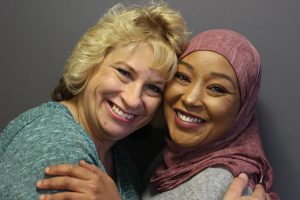 Jasmyn Morris (JM): Welcome back to an all-new season of the StoryCorps podcast from NPR. I’m your host… Jasmyn Morris.

People often come to StoryCorps to record interviews about the things that matter most in their lives. Whether it’s loved ones sitting down together… or strangers meeting for the first time… what they all have in common is their willingness to be open with one another.

And at this moment in our nation’s history, we’re being confronted with a kind of divisiveness that makes it hard for us to really hear each other. So what happens in a StoryCorps booth is even more special because it’s a place where people come together to truly listen.

So on this season of the podcast… we wanted to share some of those difficult conversations.

This week we take you back to 2015, to an Applebee’s restaurant in Coon Rapids, Minnesota, where a woman named Asma Jama — who is Somali American and Muslim — had just sat down for a meal with her cousins and their kids.

Asma was wearing a hijab and speaking Swahili with her family.

Asma Jama (AJ): We hadn’t even started to order before somebody I don’t know

started saying, ”If you don’t speak English, get out of my country.” And that hit me really

hard because I come from Africa; I’m an immigrant, but I’d been in this country for 15

years. I’ve always felt like America was my home, my second chance.

I said, ”Excuse me, ma’am. We do speak English.” She started going ballistic. And my cousin said, “We have little kids here; can you stop using profanities?” She wouldn’t listen; she just continued. And then In a split second, she threw the beer mug at me and it shattered across my face.

I was taken to Mercy Hospital. The doctor stitched me up–15 on my mouth and two on my right eyebrow–so I had 17 total stitches on my face, but I still couldn’t understand the severity of what happened to me. That’s when he gave me a mirror and I got the shock of my life.

Jodie’s sister, Dawn Sahr, spoke out against the attack and eventually got in touch with Asma. They exchanged messages on social media, but had never met in person.

Until they decided to sit down for this StoryCorps conversation.

Dawn Sahr (DS): I wanted to reach out to you so much. I just wanted to know that you were okay. That was my biggest concern.

AJ: That was my biggest concern too.

I used to be carefree. I used to go everywhere by myself. I would say hi to strangers. But after what happened to me, I felt like I had to look over my shoulder every time I go outside.

DS: I was so sorry you had to go through that.

AJ: Did you stop talking to her because of what she did to me?

AJ: Why can’t you forgive her?

DS: Because then it’s telling Jodie that it’s okay and it’s not okay.

Do you feel like you can’t speak Swahili in public anymore?

AJ: Yes, because I realized I don’t belong. I have to prove myself every single day and it makes me feel like I had to give up a lot of who I was.

DS: I’m going to pray that you can eventually become that person you used to be.

AJ: I will get there. It’s going to take me awhile. But for you to stand up for somebody you don’t know, and to say that what she did was unacceptable, that meant the world to me.

DS: I will support you in any possible way I can. You know, they say blood’s thicker than water and you stand behind your family no matter what. Well, you gotta draw the line somewhere and you’re my line.

Two days after they sat down for StoryCorps… Asma and Dawn went to Jodie’s sentencing hearing… where Jodie was given six-months in prison and up to five years of probation.

At court, Asma asked to address Jodie directly and proceeded to forgive her.

Something Dawn didn’t quite understand.

DS: You’re a bigger person than I am, you know.

AJ: It is very hard for me to come to terms with her going to jail. I would rather Jodie gets a mandatory community service, but this is just me. Going to jail doesn’t solve people’s problems. She’ll come out bitter.

DS: I don’t know if you can get more bitter. Let Jodie finally take responsibility for her actions and have to face the consequences. It’s the best you can do for her.

AJ: We can agree to disagree. As a human being and the way I grew up, you have to give people the benefit of the doubt. And my biggest prayer for her is to understand that America would never be the same without everybody in it. Whether I try to fit in, whether I wear my hijab, whether I choose to remove it, I’m an American, so this is my home.

DS: Could you imagine if I didn’t stand beside you? I would never have met you and that would have been my loss.

AJ: I feel the same way for me. If I was angry at Jodie and I refused to forgive and move on, I would never have met you and realized that you’re an amazing person.

After a short break we’ll check in with Asma and Dawn, almost four years later.

It’s been nearly four years since Asma Jama was assaulted for speaking Swahili at an Applebees in Minnesota.

And while what happened to Asma can never be erased, her conversation with Dawn was the beginning of a friendship that’s only continued to deepen and grow. The pair recently sat down for another StoryCorps interview to give an update.

Do you feel like our conversation changed you in any way?

DS: It changed me in many, many ways. Asma, what I have learned from you from day one was you’re strong. You are so strong and I think that’s what gave me the strength to do what I did. I believed in supporting you, and everybody I loved and everybody around me wouldn’t have anything to do with me.

I would see videos of my granddaughter riding her bike without training wheels for the first time at three and a half years old; just broke my heart. And it’s like, I could be there too. But who am I if I give up everything I truly believe in just to appease them, so I can be a part of their lives?

And it took three years, but–you know what?–they came to me. I stood my ground and I gained a lot of respect from my family.

AJ: I’m sorry that you had to go through that. And I honestly do appreciate it and I’m glad that you’re in a good place. But then, eventually, I hope you and your sister, Jodie, can be in a better place.

DS: It would take a lot of changing on her part.

AJ: Yeah, but I’m a big believer in second chances and I think that maybe Jodie just needs the right push.

DS: If it was her second chance, I’d be all for it but we’re talking 222nd chances.

DS: Can I ask you something?

DS: Me being in your life, does that keep bad memories for you from that?

AJ: No. 2016 was a very hard year for me, so sitting down with you actually was very, very good for me. It kind of gave me a positive light to a bad situation.

When I talk about you people always tell me, ”Why are you smiling?” I don’t even know that I’m smiling. It’s just because, in the middle of the worst time of my life, you taught me that sometimes humanity is what we need.

DS: I don’t see you just as a friend; I mean, I see you as a sister. You are such a big part of my life, I really think I would lose a piece of who I am if I lost you as a friend.

AJ: We’re never going to lose each other.

JM: That’s Dawn Sahr and Asma Jama in St. Paul, Minnesota. They first came to StoryCorps as strangers and left as friends.

And something else came of all this…

Conversations like the one you heard in this episode are being recorded as part of One Small Step, StoryCorps’ effort to remind people across political divides of our shared humanity. To learn more, visit our website, StoryCorps.org.

That’s all for this episode of the StoryCorps podcast. This episode was produced by Jud Esty-Kendall, Sylvie Lubow and me. Our engineer is Jarrett Floyd… he also wrote and produced our theme song. Our production assistant is Eleanor Vassili. Zahra Crim is our intern. Fact-checking by Natsumi Ajisaka. Special thanks to Emily Martinez and StoryCorps facilitators Roselyn Almonte and Liyna Anwar.

To see what music we used in this episode, go to StoryCorps.org, where you can also check out original artwork created for this season by artist Lindsay Mound.

Join us next week when we’ll talk about the Great Thanksgiving Listen …  a national effort to empower young people—and people of all ages—to record an interview with an elder, mentor, friend, or someone they admire… using the free StoryCorps App…

MONTAGE TAPE: “Is there anything you want to tell me that you’ve never told me before?”

NPRs Audie Cornish: And what if we took the time – to really listen?

MONTAGE TAPE: “You know if you keep talking and talking and nobody’s listening to you… that’s the kind of frustration people feel and they just… explode.”

In this week’s episode, how worlds that quite literally collided, led to unexpected friendships and new career paths.

In this episode, how kids and their parents — who have navigated many changes together — are facing the next big change apart.

podcast
Every Seed Your Mother Sowed
4:57

Every Seed Your Mother Sowed