Not all love stories start with a lightning strike. For Valentine’s Day, we bring you stories of relationships that took years to blossom and have stood the test of time. 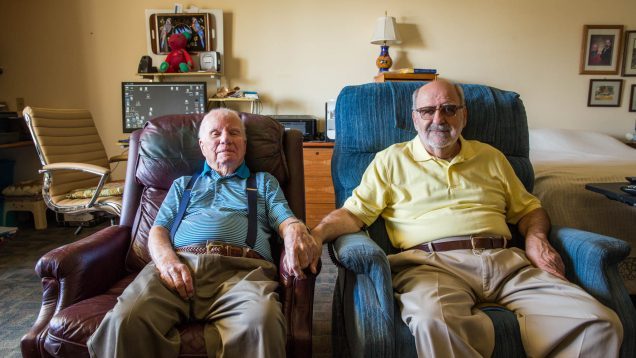 “Mississippi Turn-Around” by Nick Jaina from the album Primary Perception

“A Girl Only Prettier” by Christopher Bowen from the album $9.99 (Original Motion Picture Soundtrack

StoryCorps 523: Years in the Making

Michael Garofalo (MG): Not all love stories start with a lightning strike. Sometimes they are years in the making.

Bobbi Cote-Whitacre (BCW): Do you remember what it was like when we were 19, and totally in love, and couldn’t tell anyone?

MG: And let’s not pretend that falling in love is something that only happens when you’re young.

MG: Because the truth is, it’s never too late.

It’s the StoryCorps podcast from NPR and in this Valentine’s day episode: stories of love that took years to blossom and that stood the test of time. I’m Michael Garofalo. We’ll be right back after this short break.

Welcome back to our Valentine’s day episode. These stories are not your typical love-at-first-sight deals. These are relationships that took time – often a very long time. Our first conversation is between two senior citizens. One is a hundred, the other a spritely seventy-two. Both are veterans, having served in World War II and Vietnam respectively, and together they live in a veterans’ home in Chula Vista, California. Let’s listen in.

Jerry Nadeau (JN): So I start with my name and all that stuff? Okay, we’ll see how it works. Hello! My name is Jerry Nadeau. I’m with John Banvard.

John Banvard (JB): And I was born in Brooklyn, New York –

JN: When I first met you, John, you were 75 years old. What would it have been like if you didn’t meet me?

JB: I would’ve continued being lonely. I’d been absolutely lost.

JN: When we met, we were sort of in the closet.

JN: And I never had a real relationship. Now we’ve been together almost 25 years. And when we moved into the veterans’ home, we moved in together. And a lot of people were wondering, “I wonder what their relationship is?”

JN: Well, when we got married they knew what our relationship was! [Laughs]

JB: I was expecting we’d be ridiculed and there was very little of that.

JN: We got married at the veterans’ home and we said, “If you came to see the bride, you’re out of luck!” [Laughs] Do you remember that?

JN: It was very informal.

JB: It was done simply, yes.

JB: Which is hardly wedding food!

JN: Remember, John, I was with you in the cafeteria and somebody came up and they were with their family and they said, “Oh this is Gerard Nadeau and this is his husband, John.” I had never heard that before.

JB: Yeah. That was very nice.

JN: You’ve made my life complete.

JB: I could say the same thing to you. I think we’re probably as happy together as any two people you’re likely to meet.

MG: That’s 100-year-old John Banvard with his husband 72-year-old Jerry Nadeau in La Mesa, California. They were married in 2013. John and Jerry’s interview is part of our OutLoud collection – conversations from the LGBTQ community – and in fact all three of our stories this week come from OutLoud recordings. Many of the stories we collect through OutLoud come from people who lived before the gay rights movement, long before getting married was even a remote possibility – and they had to hide who they really were and who they really loved. That was the case with this next couple: Bobbi Cote-Whitacre and her wife Sandi met as teenagers in 1967. Nearly 40 years later, they sat down for this conversation.

Bobbi Cote-Whitacre (BCW): Do you remember what it was like when we were 19, and totally in love, and couldn’t tell anyone?

Sandi Cote-Whitacre (SCW): I do. I remember the feeling of, I have found the person I am going to spend the rest of my life with, and, discovering that I couldn’t have anyone else celebrate it with me. When something happens that makes you feel so good and you have to hide it, it takes away a little bit of the joy of finding someone.

BCW: Do you remember what it was like when we moved to Ohio?

SCW: Ohio, yes! I remember Ohio. I remember the second day that we were there that your mother came by and said that she wanted to talk to me. She told me that it was a small town, that your father was a prominent doctor, and that she would give us three days to get out of town so that we wouldn’t disgrace your father, his practice, your extended family. So yeah, I remember Ohio.

BCW: Well, they then sent me to a psychiatrist to see if they could fix me. That obviously didn’t work since we’re still together. [Laughs]

SCW: We had been together for 33 years when we finally for the first time got to stand up in front of our friends and family and tell them that we loved each other and that we cared for each other and that we were going to take care of each other for the rest of our lives. And I remember your mom deciding that her daughter should have the right to marry.

BCW: My mom had been diagnosed with a brain hemorrhage, and she actually wanted to walk us down the aisle before she died.

SCW: And this is the same woman [in unison] that gave us three days to get out of town.

BCW: Yes, same woman. So we thought about it, for about three seconds, and then said okay, we’ll have a civil union. We had it in her backyard, with three of our ministers, a lot of our friends from church. It was a beautiful ceremony. I remember the minister saying, you know, Bobbi and Sandi did it backwards, you know, they did all the committing stuff, and then got married.

SCW: I didn’t believe that there was another level that we could reach but just having the ceremony and stating publicly and having our friends and family there happy for us was sort of like being 19 again and celebrating our love.

MG: Sandi and Bobbi Cote-Whitacre in Vermont. Four years after their Vermont civil union they were officially married in the state of Massachusetts. Bobbi and Sandi needed patience – an incredible amount of it – over the three decades before they could openly declare their love for each other. And in this final story, we’ll hear about a different kind of patience: the kind you need when you wait nearly half a lifetime just to find somebody to love. The couple in this story met in the late 1990s. Don Boniface was single at the time, living with AIDS. Ted Kuhar had only recently told friends and family he was gay. Don begins their story.

Don Boniface (DB): My partner had died of AIDS and I had gone through two very, very difficult years of mourning and being on my own.

Ted Kuhar (TK): I was an aging man who was just out a few years. I came out at age 50. So I lived my life before then with friends and family and lots of love in my life, but I didn’t know what this kind of love was.

DB: Well, thank God a mutual friend introduced us. It wasn’t love at first sight, but there was some kind of a recognition.

TK: I invited you, Oh come on up to Vermont.

TK: I was scared.

DB: He was scared.

TK: You arrived and I went over and shook hands, ”Hi, come on in.” I gave you a bedroom that was seven doors away.

DB: As far from his bedroom as possible.

TK: Three nights later, as I’m drying silverware, he said, ”Come on Ted. Get real.” So —

DB: We started long-distance dating. Ted would come and visit me in New Jersey —

TK: I remember you taking me around to meet the ladies at the bank and supermarket and I’m hanging on to you just —

DB: — holding me down to earth.

TK: But I loved it. I never had any kind of experience like that before in my life.

DB: Well, you were a real challenge for me because I knew that you had not been in a romantic relationship previously.

TK: I remember so well before you, I used to say, “I have so much love in my heart and I want a person to come along who can have this love in my heart that could burst there’s so much of it.”

DB: I could certainly see a lot of what was there, waiting to come out, and it has paid off.

TK: When I met you you had been living with AIDS for eleven years, so the chances at that time of this going on much longer weren’t real great.

DB: I remember the time that we were in my living room. This was when you were still pretty frightened, and you looked me right in the eye and you said, “You know, I won’t hang around for you if you get sick.” And that hasn’t been true at all. You were there for me and you would be there for me.

TK: You’re a part of me. For now and a good time to come.

DB: If I did die before you, I would hope that you would have — were open to the possibility of another relationship.

DB: You know once you lose a partner, for me it became a real issue. And I’d hope that you felt something similar to what I felt. My life is worth sharing with somebody.

TK: A big difference between us is I have had one person in my life. That’s you. You’re it. And I love you so much.

DB: Love is what this is about. And that’s why there’s no question in my mind that the death of one of us will separate us and nothing else will come between.

MG: And that’s it for this episode.These stories were produced by Liyna Anwar, Katie Simon, and me. If you want to see photos of people you heard in this episode, you can go to our website, StoryCorps.org, where you can also learn how to record your own StoryCorps interview. Don’t forget to rate or review us wherever you download the show. And if there’s ever a person on this show who moves you and you want to talk to them, you can leave a message, a voicemail. There’s a number: (301) 744-TALK. That’s (301) 744-T-A-L-K. Leave a voicemail, we’ll pass it on to them and maybe even feature it on the show. This has been the StoryCorps podcast. I’m Michael Garofalo. Thanks for listening.