All that survives from the “golden age” of Yiddish radio in the 1930s to 1950s are 1,000 fragile discs, rescued from storerooms, attics, and even dumpsters. But what a story they tell! The Yiddish Radio Project is a celebration of these recordings and of the forgotten geniuses and dreamers who created them.

In its heyday during the 1930s, Yiddish radio flourished across America. Thirty stations in New York alone aired Jewish programming: advice shows, variety shows, man-on-the-street-interviews, news programs, music, and game shows in both Yiddish and English. The programs in this collection give us one of the most intimate snapshots of American Jewish life in the 1930s and ’40s—the collision of Yiddish and American cultures, the dawning reality of the genocide occurring across the ocean, and the day-to-day lives of immigrants struggling to make it in a new land. 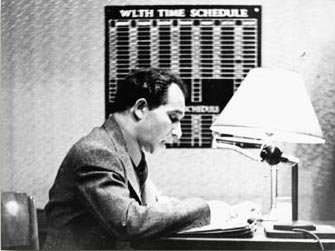 The Yiddish Radio Project started when ethnomusicologist Henry Sapoznik (who is credited with sparking the Klezmer music revival in the United States) tripped over a pile of 16″ aluminum disks in a musty storage room in New York City. He paid $30 for the collection of 100 discs. The seller was thrilled.

Over the years, Sapoznik has amassed the largest (and only) collection of Yiddish radio in the world—more than 500 hours of rich, wonderful, irreplaceable material from this critical and tumultuous era in American Jewish history.

For the next two episodes of the StoryCorps podcast, we’ll revisit some of the public radio documentaries produced from this collection by Sapoznik, StoryCorps founder Dave Isay, and Yair Reiner as they were broadcast on NPR’s All Things Considered in 2002.

In Part 1, you’ll hear a brief history of Yiddish radio, memories of a show called Rabbi Rubin’s Court of the Air, and one of the earliest known broadcasts of a Holocaust survivor telling his story.