StoryCorps producer Jasmyn Belcher Morris met Sidney Radner in 2010 while working on a Halloween story. Sid, 91, was an amateur magician from Massachusetts who was once the owner of one of the world’s largest collections of Harry Houdini memorabilia. 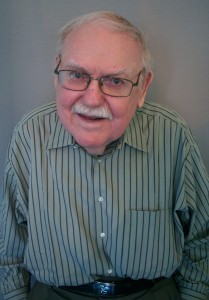 Harry Houdini, the great illusionist and escape artist, died on October 31, 1926 at the age of 52. Famously, Houdini told his wife Bess that he would attempt to contact her from “the other side,” and for a decade after his death, she marked the anniversary with a Halloween séance. In 1936 Bess gave up trying to get in touch.

Others continued to carry on the tradition (without success) and in the 1940s, Sid, a protégé of Houdini’s brother Hardeen, picked up the torch. He eventually christened the yearly event The Official Houdini Séance™, and they continued until his death in 2011 more than 70 years later.

In early-October 2010, Jasmyn traveled to Holyoke to record for StoryCorps (hear their interview below). Sid welcomed Jasmyn into his home, but before beginning the interview, he took her down a flight of stairs to his basement revealing a trove of Houdini artifacts that included boxes filled with old rusty handcuffs and keys, books, posters, and photographs—all having once belonged to Houdini.

Weeks later, after the story aired on NPR, Sid invited Jasmyn (seen below wearing a set of Houdini’s handcuffs) to attend The Official Houdini Séance™ in New York City. 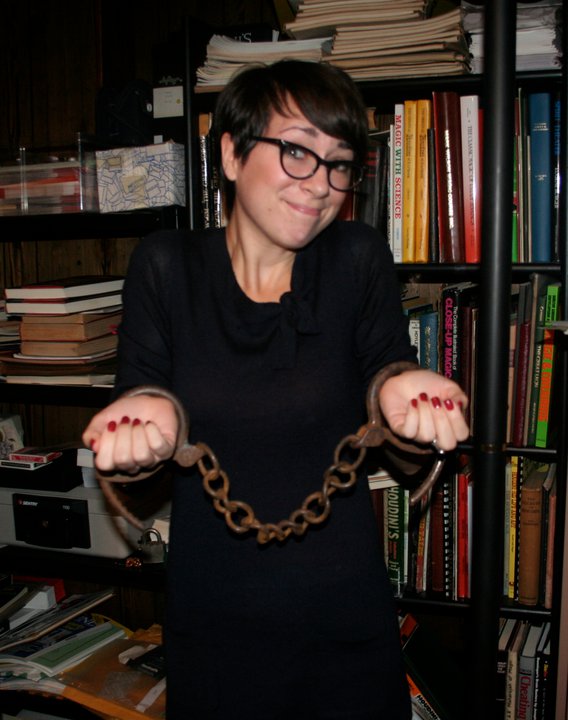 Sid, the séance director, sat at a round table along with several honored guests making up the group’s inner circle. Spectators filled the seats around the table but before the séance could start they realized that the inner circle was one person short. The medium (a conduit between the physical world and the spiritual world) pointed directly at Jasmyn and asked her to join them at the table. According to him she was, “young, fresh blood,”—just what the group needed. She joined hands with the others and asked Houdini to appear (or at least show some sign that he was present). Unfortunately Houdini was not heard from, and sadly, this would be Sid’s last séance.

While honored to have had such an integral part in trying to communicate with one of history’s great performers, Jasmyn, a skeptical journalist, may not have been the ideal person to include among Sid’s inner circle. And although he never had another opportunity to reach out to Houdini from the physical world, we hope that Sid, Harry, and Bess have been spending a lot of time together in the spiritual world.

blog
Please help sustain this work by making a gift to StoryCorps this Giving Tuesday!

Please help sustain this work by making a gift to StoryCorps this Giving Tuesday!

StoryCorps–and the work we do to strengthen our ability to be empathetic and bridge divides–is critical for a healthy society, especially now when there are endless efforts to divide us all.