Callings: The Purpose and Passion of Work, our collection of 53 inspiring stories from those at the heart of the American workforce, is now available in paperback. In this excerpt, beer vendor Clarence “Clancy” Haskett talks with his friend and former colleague, Jerry Collier. 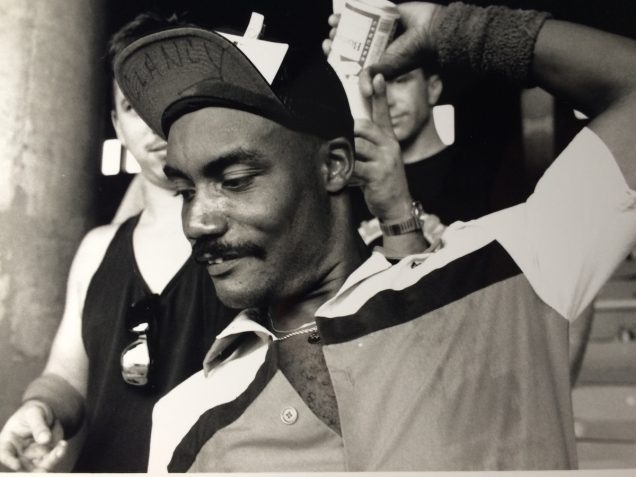 Clarence “Clancy” Haskett: I used to play baseball in the streets with my friend John every single day, and we’d always listen to the baseball games on the radio. When we were fifteen, John started working at the stadium during the Orioles games, and then I went to work there with him, too. I always remember the date: June the seventh, 1974. I made $8.25 that day selling sodas. And from that very first day, I was hooked.

Jerry Collier: I met you probably the second day of my new job as a beer vendor well, a wannabe beer vendor—at Memorial Stadium when I was nineteen years old. The Orioles won the World Series in ’83, and I came in ’84. And I fell in love with that job.

Jerry: Every vendor at the stadium was on a list that was ranked based on sales every twenty-seven games. There’s an eighty-one-game season. And the person at the top of that list could pick what product they wanted to sell. And the best product in the stadium was beer.

Clancy: One of the guys, he had this little slogan that he started, and it went around all the vendors. So once you started working, he said, “What’s gonna happen when they revise . . .that . . . list?” He used to say it a hundred times a day. [Laughs.] But it was a motivational tool for all of us.

Vendors would do little tricks and everything to sell more. I had the gift of gab, so that helped me out. I used to do rhymes, and everyone used to love those rhymes. It’s just the type of job where you can’t start off in slow motion. You have to always be aggressive. I was a Division I sprinter in college, and I used to race guys up and down the hallways. And since 1984, I’ve been consistently in the top five in sales. Next year will be thirty consecutive years.

Jerry: You were number one for a really long time, and I was number one for a really long time. So when you go into the stadium and you’re at the top, you have incredible pressure on you to be a selling machine. I mean, the only thing that mattered was, “What’s gonna happen when they revise . . .that . . . list?” [Laughs.] Because if you stop for a second, number five is coming. Number four is coming. And it’s just perfect competition. It becomes almost like a sport.

Clancy: Well, that’s the way that I look at it—my mind-set is like I’m a professional athlete. I have to stay in shape, I have to train during the off-season. Because vendors running around with straps around their neck? That’s only on television commercials. Good vendors pick up their case and they carry it. Back in the old days we could carry five cases at a time.

Jerry: To be a vendor you’ve got to be athletic, personable, visible, fast—and be able to process a lot of information in your head. But we also had some vendors who weren’t as athletic. One guy, he was working on an engineering degree from University of Maryland, and he created any number of mechanical devices to be able to pour beer faster. I mean, it was stunning. He went from being a middle-of-the-road vendor to being basically at the top.

Clancy: But I would say, “You don’t need a can opener to sell beer; you need a personality!” And I still outsold them all. [Laughs.] But you know, we vendors competed against each other every single game, and we still hung out together.

Jerry: I would say it was like guys at any sporting event: when you’re in the heat of it, you’re all in. But then when it was over … I mean, we’ve been on vacation together. You were in my wedding. I was in yours. I’ve been in two handfuls of vendors’ weddings! Love them like they’re brothers.

From my perspective, if you’re really good at this, you’re good at it because you love it. And it’s consuming. Put it this way: how did we plan our weddings?

Clancy: Around the Orioles’ schedule.

Jerry: [Laughter.] That’s true. To miss a game, the stress levels weren’t worth it. And when you get to that level, it’s in your soul. 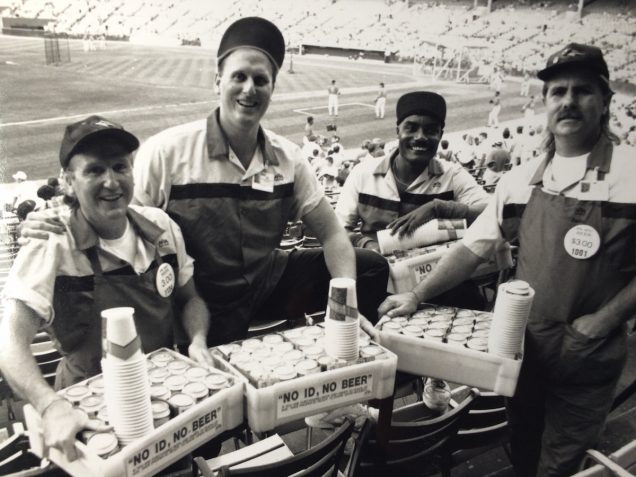 I left in June of ’96 because my first son was born, and I got promoted at my other job. I struggled, because I loved vending. But the hardest part was leaving that place and not being able to see you guys every single day.

When I first arrived at the stadium and looked around the ballpark, you were just this ray of sunshine: a guy who outworked people, who loved all the customers more than anybody else. You were so positive, and you just crushed it. And I said, “That’s who I want to be.”

I mean, you’re larger than life in a lot of ways. But I know there’s another side of you—more than the rhymes and all that.

Clancy: Right, yeah. My mother died ten days after I was born, and since my father was working a lot, my grandmother became my guardian. I ended up moving back with my father when I was five or six, and everything that I did—the littlest thing—I got a beating for. It was just war. Just before I turned nine, my father beat me with an extension cord, and it left large welts on my forehead. My friend saw it on a Saturday, and when I got to school on Monday, they took me out of class and asked, “What is going on with your head?” And I told them how I got it. They packed up my bags, and I moved in with my aunt that day.

That was probably the turning point in my entire life. I got around people who loved and cared about me. It changed my life. And it helped me think about things before I did them. Instead of being hotheaded, you know, I just don’t go there.

Jerry: Well, you epitomize to me all that’s right in the world. You’re a great man. And hearing how you grew up helps me to have a deeper understanding for why you see things the way you do. So if it’s a rainout at the Orioles game and you only sell two cases of beer, in the big scheme of life, that’s not even a setback.

Clancy: No, that’s not a problem at all.

I feel good. And so as long as I’m still healthy, I’ll put in another good ten years. That’s going to be fifty years of vending. Wherever I am, I can go in a restaurant or a bar that I’ve never been in before, and somebody say, “Send that guy over there a beer!”

Jerry: That’s something I miss. You sit in a restaurant and all these people come up to you, you know? Nobody knows me anymore. I’m just a boring banker now. [Laughter.]