Doug Neville (left) and Ryan Johnson (right) met in 1986, shortly before Doug was diagnosed as HIV-positive.

At StoryCorps, they talk about their three decades of friendship and how Doug’s diagnosis has shaped their perspectives on life.

Dekalb Walcott Jr. spent more than 30 years as a firefighter for the Chicago Fire Department.

He’s now retired, but his son, Dekalb Walcott III, is following in his dad’s line of work. At StoryCorps, Dekalb III talks about how becoming a firefighter meant fulfilling a lifelong dream.

Dekalb Walcott III also wrote and recorded a song, “It’s a Callin’,” about his career. Listen to it here:

When StoryCorps visited Danville Correctional Center in Illinois, one of the inmates who told his story was Carlos Rocha.

Carlos grew up in Chicago, and he, like his brothers, joined a gang. In 1998, he was arrested for weapons possession. Just before he was to be released on bond, Carlos got into a fight with another inmate and killed him. He was sentenced to 24 more years behind bars.

In 2009, Frank Tempone (left) was severely depressed. As a result of what he calls a mid-life crisis, Frank left his wife and three kids to go live on his own.

After two years apart, Frank reunited with his family. He brought his oldest son, Jack (right), to StoryCorps to apologize.

In 2013, Aaron, a freshman at Corliss High School on the South Side of Chicago, was living on the streets.

Celeste Davis-Carr, Aaron’s teacher, learned that he was homeless through a recording he made while his English class was participating in StoryCorpsU, a former program of StoryCorps Education.

A year later, they sat down to make another recording for StoryCorps.

Aaron’s last name and photo were withheld at the request of his foster care agency.

Alexis D’Luna had CHARGE Syndrome, a rare, life-threatening genetic condition that causes a number of birth defects. Alexis was intellectually disabled, legally blind and had hearing problems. She stood just under 5 feet tall because of deformities in her legs and back.

Many children with CHARGE don’t live beyond infancy, but Alexis lived to be 25. She died in her sleep in December 2012.

Her parents, Debra and Lionel D’Luna, came to StoryCorps with her sister, Adrienne, to remember her.

Dan Miller grew up in Wisconsin, one of nine children with an alcoholic and abusive father.

At StoryCorps, he talks with his wife, Celeste Januszewski, about his father’s influence on his life, and how he has tried to eliminate the behaviors he experienced from his own children’s lives. 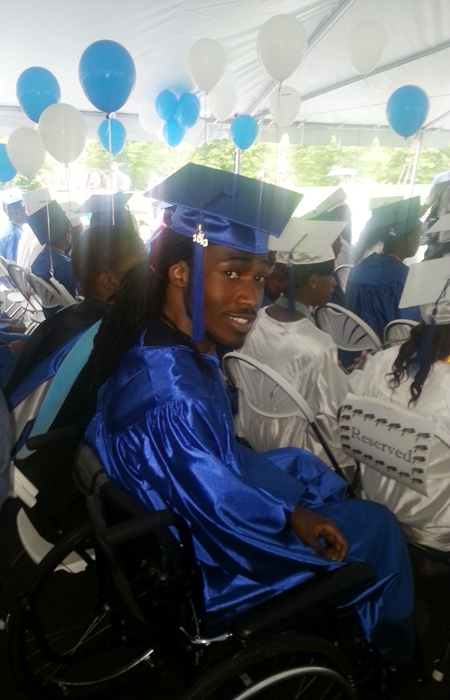 One night in 2009, 14-year-old Ondelee Perteet and a friend went to a party in his hometown of Chicago. He got into an argument and was shot in the face.

When his mother, Detreena, arrived at the hospital, doctors told her he would never move his arms and legs again. She then moved into the hospital with her son and was there for him through each difficult moment.

At StoryCorps, Ondelee tells his mother that while he knows how hard it was for her to see him in a wheelchair, he “felt blessed to have my mama do this for me” and never give up on him.

Ondelee is now enrolled at Malcolm X College in Chicago and plans to start school in January 2014 to study communications, with hopes of becoming a motivational speaker.

Patricia Lyons Simon Newman talks with her son, Scott Simon, host of NPR’s Weekend Edition Saturday, about some of things she has learned from him.

Growing up in the 1960s in a housing project on the South Side of Chicago, Alexis Martinez (left) knew that she had to hide from others that she is transgender.

At StoryCorps, she told her daughter, Lesley Martinez Etherly (right), about growing up, parenthood, and now living as a woman.