Many people come to StoryCorps to honor loved ones — often their parents. Yomi Wrong brought her mother, Sarah Churchill, to a recording booth to say thanks for never giving up on her.

In 1972, Sarah was pregnant with her third daughter. Shortly after giving birth, doctors told her that her baby had a rare genetic disorder that caused her bones to break under the slightest pressure. The doctors told Sarah that she had a choice — she could try to raise a child who might not survive, and, if she did, would be a tremendous burden on their family, or Sarah could leave the child at the hospital since she wouldn’t live long.

That baby was Yomi, who, at the time of this recording, was about to celebrate her 45th birthday. Here, Sarah tells Yomi about the night she was born. 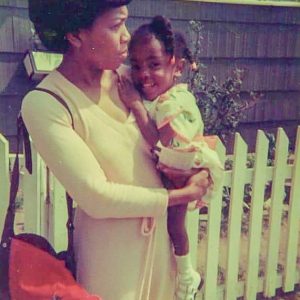 This interview was recorded in partnership with the Disability Visibility Project.

Bottom photo: Sarah Churchill at a family gathering in the Bronx with her daughter, Yomi, in 1976. Courtesy of Yomi Wrong.