Parents at an Execution

On March 12th, 2003, Texas is scheduled to execute its 300th inmate since the state reinstated capital punishment in 1982: Delma Banks, Jr., who was convicted of murdering Richard Wayne Whitehead, a 16-year-old high school student.
Banks has been on death row for 22 years, his execution postponed thirteen times. Banks was 21 at the time of the murder and has always professed his innocence. When given the opportunity to plead guilty in exchange for a seven-year sentence, he refused, saying he could not confess to a crime he did not commit. His trial lasted two and a half days. The state’s main witness has since recanted his testimony, citing police coercion. Banks’s sentence was overturned by the U.S. District Court, then reinstated by a Court of Appeals.
Two weeks before the scheduled execution, the Whitehead and Banks families reflected on the past 22 years and what they might feel after the waiting was over.

Recorded in Texarkana. Premiered March 11, 2003, on All Things Considered.

An essay about Richard Whitehead, written by his parents 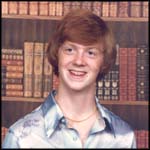 Richard Wayne Whitehead
16 Years Old
July 2, 1963 to April 11, 1980
Wayne, our first child, was a sweet, naive, typical teenager who loved life. In his naiveté, he saw no meanness or evil in others. He always saw only their goodness. Upon his death, he left a loving family of two brothers (Darren and Jason), his parents (Jackie and Larry Whitehead), grandparents, great-grandparents, as well as numerous aunts, uncles, and cousins.
Like his brothers who are also avid bowlers, at six years of age, Wayne started bowling in a youth bowling league. He quickly developed a passion for bowling and bowled on into high school. Throughout their bowling years, Wayne and his brother Darren won numerous local and state awards and were Arkansas State Doubles Champions. In his junior year at Texas High School (Texarkana, TX), Wayne applied for and won the first scholarship awarded by the Texarkana Junior Bowling Association based on his bowling achievements and scholastic record. As a tribute to him upon his death, this scholarship was renamed, “The Wayne Whitehead Memorial Scholarship” and is awarded yearly to a deserving junior or senior high school bowler.
Not long before his death, Wayne had gotten a car and was so very proud of it. This car, a 1969 Ford Mustang, was his pride and joy. It needed some “fixing up,” but that made it even more special to him. His plans were to customize it to his liking, with his dad’s help, and have fun in the process. However, his plans for his car were never realized. He left our house on a Friday night to attend a high school dance. After the dance, he went to the bowling center. There he ran into Delma Banks, Jr. He worked with Banks at the Bonanza Steak House. The weather was rainy and messy, and Wayne gave Banks a ride home. After dropping a friend off at her house, they went to a local park. It was at this park that Banks murdered our son. He shot him in the back of the head and in his shoulder. Then, just to make sure, he shot him point blank between the eyes. This cold blooded murderer left our sweet boy in that park, took his car, and drove it to Dallas, TX, where he abandoned it on a Dallas street. The car was never found. Later, during the trial, Banks told a friend in Dallas that he “did a white boy just for the hell of it.”
Banks was convicted of capital murder and sentenced to death twenty years ago. He has been on death row at Huntsville, TX, all that time. He has filed appeal after appeal, after appeal, and has the NAACP fighting for him. In August 2000, the Federal courts granted him a new punishment phase, setting aside his death sentence. Now, Wayne’s family will go through all the torment of another trial with all the painful memories resurfacing. This case even attracted national attention because of the presidential election and George Bush being a candidate.
In all this chaos, Wayne, the innocent victim, has all but been forgotten. To his family, he was a living, breathing, sweet, sweet boy before he met Delma Banks, Jr. To us he always will be just that. All we have left now are memories of Wayne, some that are nightmares and others that are oh, so sweet. That’s what Banks left us – just memories. Wayne was cheated out of so much at the hands of another person, and twenty years later his family still does not have closure and peace.
Delma Banks, Jr. was scheduled to be executed on March 2003, but he was given a stay by the Supreme Court. He is still on death row.