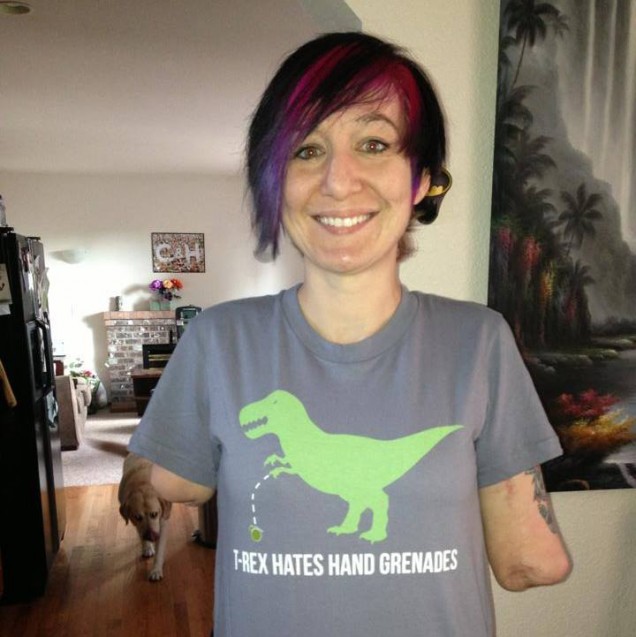 Army Sgt. 1st Class Max Voelz and his wife, Staff Sgt. Kim Voelz, worked in Explosive Ordnance Disposal—the Army’s elite bomb squad. Both Max and Kim were sent to Iraq in 2003. One night, Max called in the location of an explosive and Kim was sent to disarm it. She did not survive the mission. In 2011, Max came to StoryCorps to remember her.

At one of Max’s lowest points, he turned to another bomb tech, Sgt. Mary Dague, who lost both of her arms during an IED disposal in Iraq (pictured above in one of her favorite t-shirts). Max and Mary (pictured together at top of page) came to StoryCorps to talk about coping with loss. 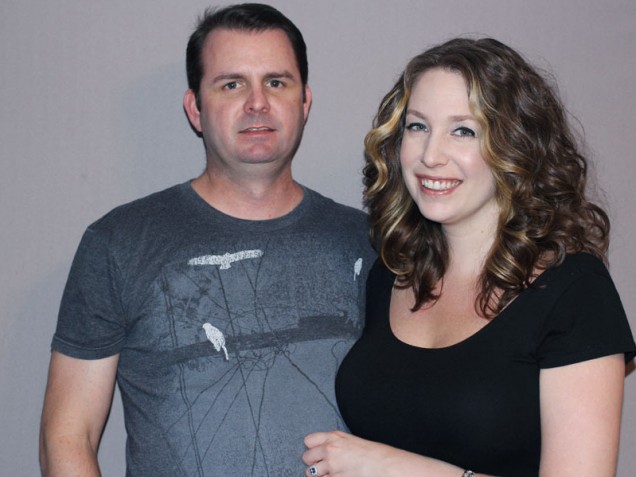 Web Extra: After Max’s story was broadcast, NPR listener Leslie Holot (pictured at right) reached out to him on Facebook. The two fell in love and got engaged. They came to StoryCorps in 2014 to talk about their relationship.

“In your high school yearbook, under your name, it says, ‘Goes for square-dancing in a big way.'”

Helen Ann McNulty (above right) sat down with her daughter, Janice McNulty, to record this Legacy interview in partnership with Forbes Hospice, located in Pittsburgh, Pennsylvania.

Listen to an excerpt from Helen’s interview:

Click here to read a transcript of the conversation.

Recorded in December 2014, they speak about Helen’s big family and about an outside brick oven that Helen’s father used to bake bread. Janice also hears about when her father first set his sights on Helen at a square dance, “Dad had seen you, and there’s all your sisters, and he said he wanted the one with the red hair.”

Helen talks about her life as a farmer, describing it as tough, but good living, “Important thing was to get your kids educated, so that they could have a better life than what we did.” The conversation ended with the mother and daughter wishing the sun would come out and sharing their love for one another, “I hope God let’s us be together for a long time.”

Juliet Jegasothy (right), who is originally from Sri Lanka, tells her friend Sheena Jacob (left) about adjusting to life in the United States.

Samuel Black talks to his wife Edda Fields-Black about his father who worked 16-hour days operating the boiler room of a high school to ensure that the pipes did not freeze. “Working all those hours, he didn’t have time to discuss things. You had to get it right that time and that time only.” A stern disciplinarian, his father only had to look at his sons and they knew what he was thinking.

Joyce Kahkonen discusses the musical instrument her family is closely linked to—the accordion—with her daughter Gay. Joyce’s father played the accordion professionally and his enthusiasm was contagious—from polkas to waltzes and the standards, he taught all of his children to play. His advice to his daughter: “Honey, remember one thing, if you can’t play good, play loud.”

Ken Kobus (left) tells his friend Ron Baraff (right) about his father, John Kobus, who worked in a steel mill for nearly 40 years. The job left an imprint on both Ken and John. When John was near the end of his life and in hospice care, he would lie in bed and make hand motions in the air—the same ones he made while working in the steel mill.

Henry Belcher (left) tells his friend Major A. Mason III (right) about tap dancing in the 1930s when he joined with two friends to become the Six Sensational Sizzling Shoes. Their success brought new problem–with drugs and alcohol–which led Henry to leave the group. He stayed away from dancing for years, but a chance encounter with Gregory Hines got him dancing again.