After 15 Years of Incarceration, Mother is Reunited with Daughter Due to COVID-19

When Nia Cosby was 4 years old, her mom, Chalana McFarland, was convicted of multiple counts of mortgage fraud, and sentenced to 30 years in prison. It was the largest sentence ever handed down for this offense at the time, and the judge went on record to say he was giving her a harsh sentence as a deterrent for those wishing to commit similar crimes.

Nia was raised by her grandparents, but spoke to her mom weekly and visited her as often as she could. Chalana did everything she could to remain an active part of her daughter’s life, often making her custom school supplies and monogrammed socks for her basketball tournaments. 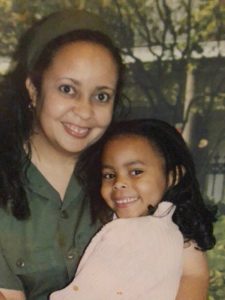 After Nia went to college, it became harder for them to see each other in person due to visitation restrictions at the Florida prison where Chalana was incarcerated. But in April, the U.S. Attorney General sent a memorandum recommending that facilities release nonviolent inmates who were vulnerable to COVID-19. Chalana was among those selected to be transferred to home confinement, and was released on June 9.

In their first weekend together in 15 years, Chalana and Nia came together for StoryCorps to reflect on the challenges they’ve faced and look towards the future.

Today, Chalana remains in home confinement in Marietta, Georgia. Nia continues to live in Florida, where she is pursuing a business degree at a local university.