Maggie Marquez and Jessi Silva grew up in the desert town of Marfa, Texas in the 1950s. At the time, segregation of Latino and white students was not legal. However, Marfa’s school system — like many others in the Southwest — practiced de facto segregation, in which Latino and white children attended different schools.

In Marfa, Latino children attended the Blackwell School. Many of the students spoke Spanish as their first language. 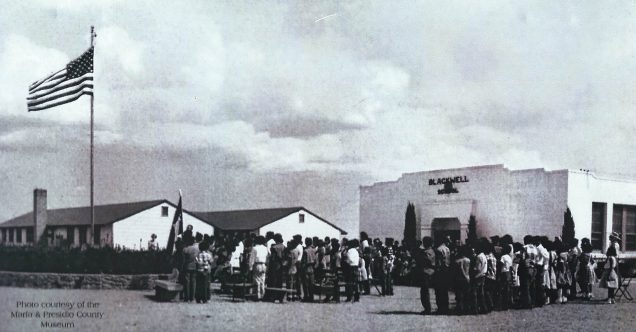 Both Maggie and Jessi were students at Blackwell. They came to StoryCorps to remember the day their school banned students from speaking Spanish in a ceremony called the “burial of Mr. Spanish.”

In 2007, a group of Blackwell alumni, including Maggie and Jessi, returned to the school grounds, where they buried a Spanish dictionary and dug it up in a symbolic ceremony to “unearth Mr. Spanish.”

In recent years, a local organization, the Blackwell School Alliance — in partnership with Marfa Public Radio — is collecting oral histories featuring the voices of former students. Listen to more of their stories.

Top photo: Jessi Silva and Maggie Marquez on the grounds of the Blackwell School. By Sarah Vasquez for StoryCorps.

Bottom photo: A group of students reciting the Pledge of Allegiance on the grounds of the original Blackwell School. Courtesy of the Marfa and Presidio County Museum.